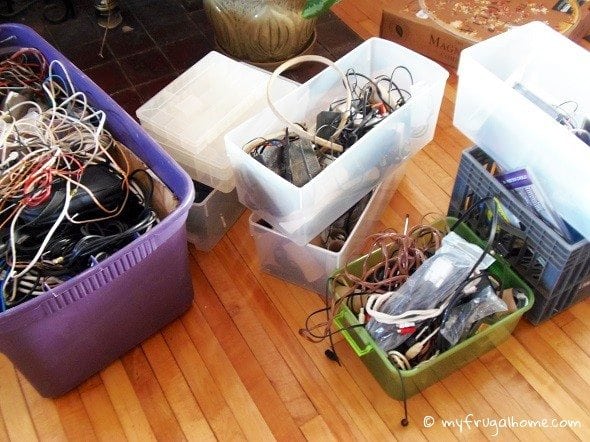 If you need a cord, my husband probably has it.

I used to grumble every time he bought another one at a yard sale, but I’ve long since learned to go with it. He ALWAYS has the cord we need on hand. When we set up a movie theater in the backyard for my oldest daughter’s 11th birthday, he had enough speaker wire to wire the whole yard; and when we bought the girls a Kindle for Christmas, we didn’t have to order the AC adapter to charge it because he had one of those, too. These little victories save us money and trips to the store, so it’s worth dedicating a bit of basement space to his cord stash.

But take one look at the picture at the top of this post, and you’ll see that his cord stash was no longer taking up a “bit” of space, and that it had, in fact, become quite the tangled mess. What to do? What to do? 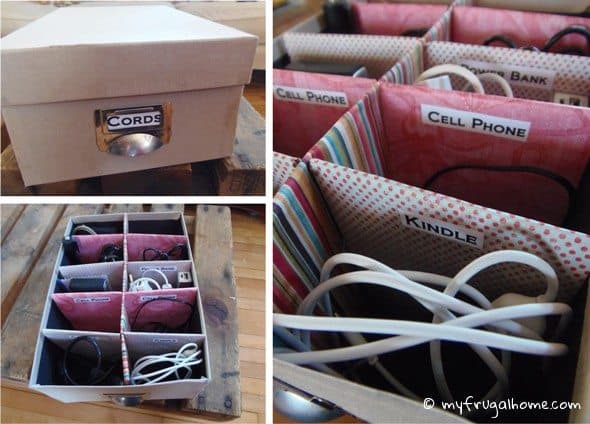 While I was contemplating that, I decided to start with our everyday cords. We’ve always kept these in various drawers, and I was tired of having to remember where each charger and cord was located. I was equally tired of the messy jumble of cords in each drawer. It was time to get them all in one place.

When I came across a post on IHeartOrganizing, I knew I had my solution. Following her cue, I pulled a spare photo box out of the basement, created some dividers for it using cardboard from an empty box, and covered them with scrapbook paper to make them pretty. Then, I rounded up all of our cords, stuck them into the various cubbies and made labels for them. We’ve been using this system for several weeks now, and it’s working beautifully. No one asks me where this cord or that cord is anymore, and everyone is putting things back when they’re done. A major win! Better still, other cords have made their way to the box since my initial round-up. If you look closely at the picture, you’ll see that I have several more labels to make because of this.

With that victory under my belt, I decided I was ready to tackle our bigger cord problem … 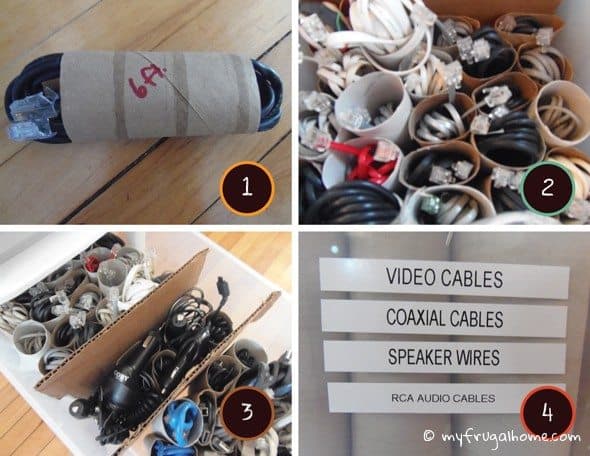 I had seen people on Pinterest who were using toilet paper rolls to organize their cords, and I liked that idea, but it didn’t seem like a complete solution. How would you know what you had in each tube once you had them all tucked into a box?

Working together, my husband and I came up with a really workable system. First we sorted all of the cords by type. Computer cords went into one pile, audio cords went into another and so on and so forth. Then, we wound up all the cords and tucked them into toilet paper rolls (by we, I mean he. Cord winding: not part of my skill set.).

Because he had multiple lengths of certain cords, he also noted the length of each one on the side of the tube. This will save us from having to unravel cords to find the right length later.

We had one of those plastic drawer roll-y carts that we’d rescued from a curb pile, so we decided to make that his cord organizer. Only problem: it had four drawers, and we had more than four categories of cords. To make it work, we cut dividers from a cardboard box, and fit them inside the drawers. Then, we finished by making labels for each drawer. 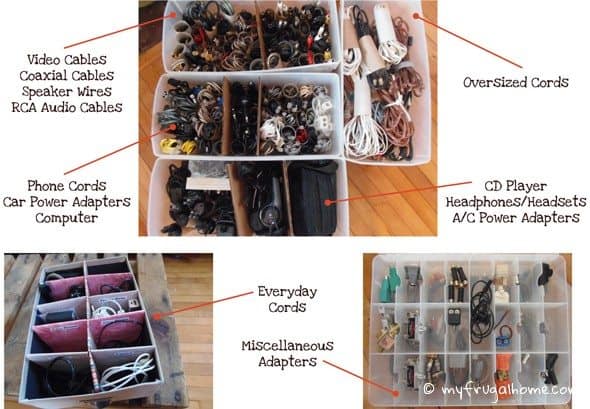 Here’s how we divided everything up. Looks good, right? That box in the bottom-right corner is a tackle box that we used to organize all of his adapters. By giving each one its own compartment, it’s easy to see what we have at a glance. 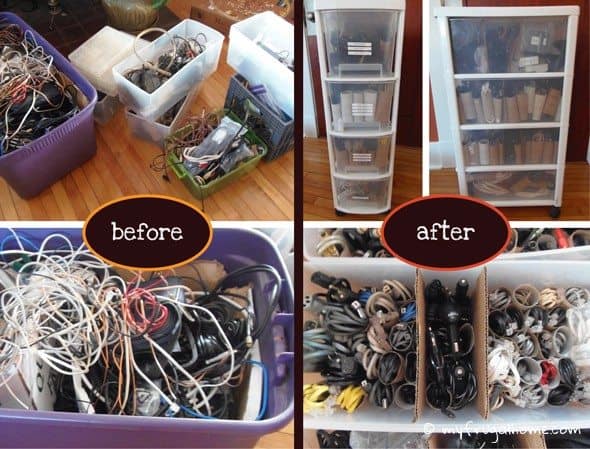 Such an improvement! We eliminated several space-hogging storage tubs, got our messy jumble of cords under control, and we didn’t spend anything to do it. Now, that’s my kind of organization project! 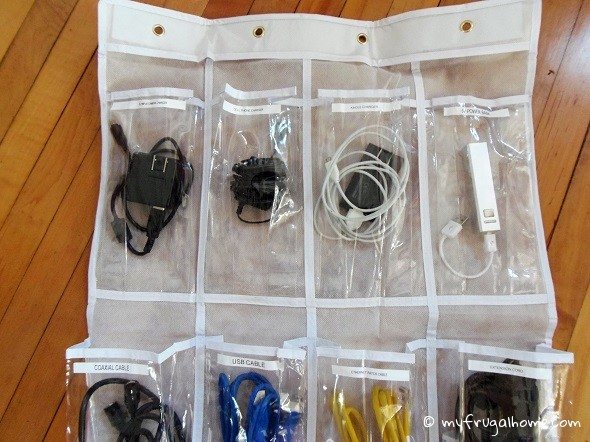 Dealing with the same cord problem on a smaller scale? Use an over-the-door shoe organizer to organize your cords. Just slip a different cord into each pocket, and label the outside so they’ll be easy to find. Then, hang it in the back of your coat closet for easy access. 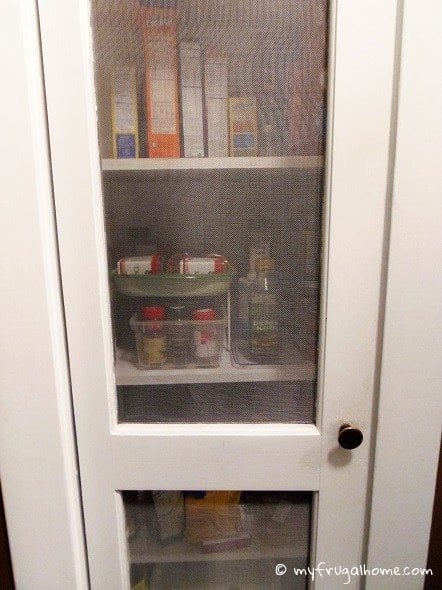 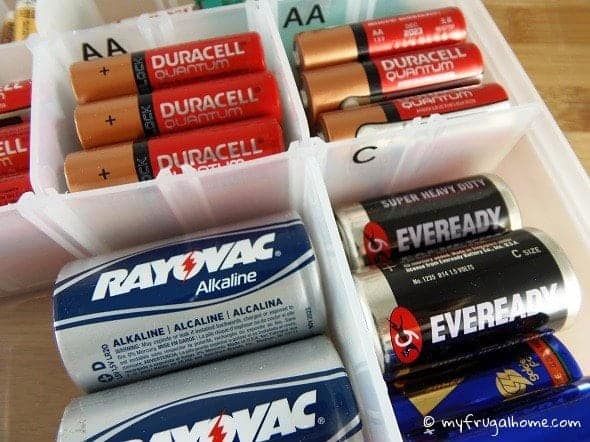 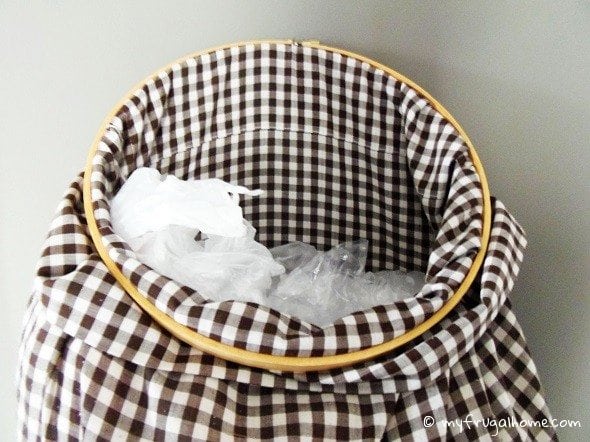 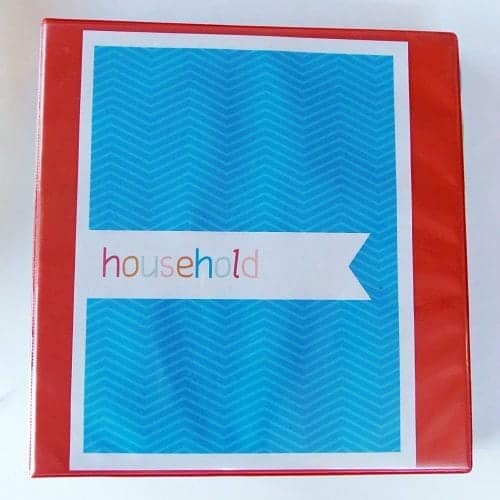 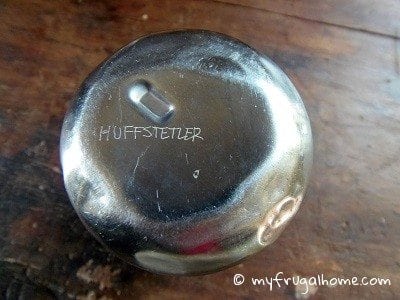