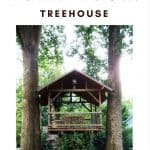 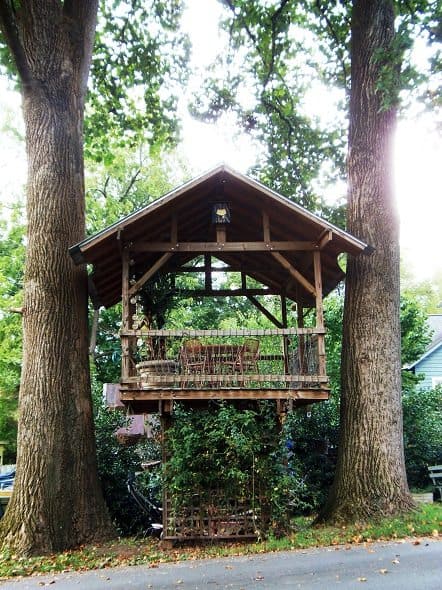 It’s a sunny day, so let’s take the home tour outside. Today, I’d like to show you our family treehouse.

My husband, dad and I built this treehouse eight years ago (I can’t believe it’s been that long).

When my kids first asked for a treehouse, I admit I was stumped. The two poplars in our side yard aren’t exactly “build in” trees. The branches are about a gazillion feet off the ground. In fact, if you stand downtown and look towards our neighborhood, you can easily pick them out. They tower over all the other trees in the area.

But, the kids really wanted a treehouse (and so did I), so I eventually landed on the idea of building one between the two trees.

Once I had that figured off, I was off and running. 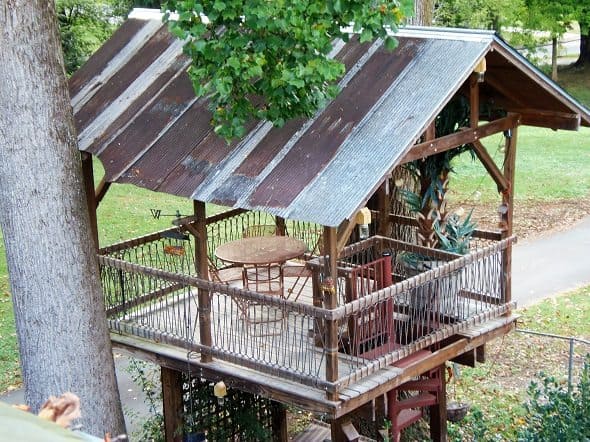 I didn’t want it to be something we’d outgrow, or something that was just for the kids, so I designed a treehouse that the whole family could enjoy. The kids play in it; we eat meals in it; we have parties in it; and I work in it when the weather’s nice. #bestofficeever 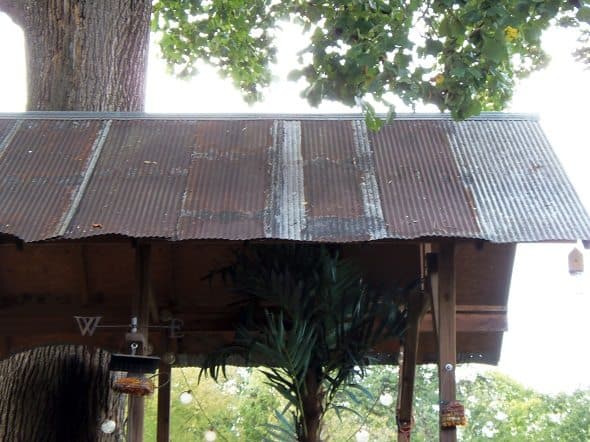 To keep the construction costs down, and make it look like it had been there forever, we used salvaged tin for the roof. It came from a barn that was being torn down, and didn’t cost us a thing. It also happens to match the tin on our garage roof perfectly.

Lumber isn’t cheap, so we started by building the treehouse deck. Then, we added the roof the following year. 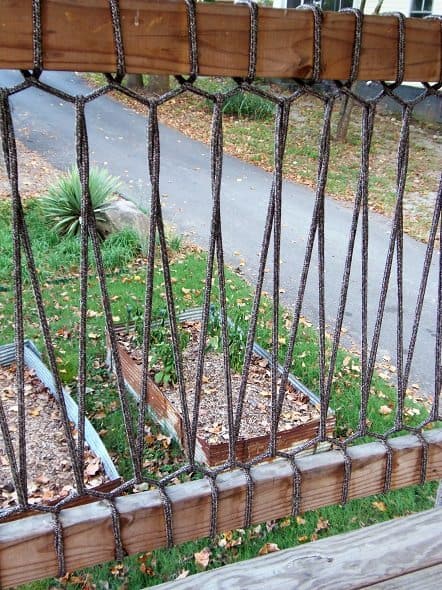 I checked out some treehouse books from the library for inspiration, and came across instructions for weaving rope railings. I loved the idea, so that’s what we did in our treehouse. They’re woven out of camo poly cord. The only downside to this is that the rope does eventually start to wear out, and at that point the birds consider it fair game for nesting material. I’ll show you my solution for that in a bit, but bottom line: we’ve only had to redo the railings once in eight years, so I can live with that. 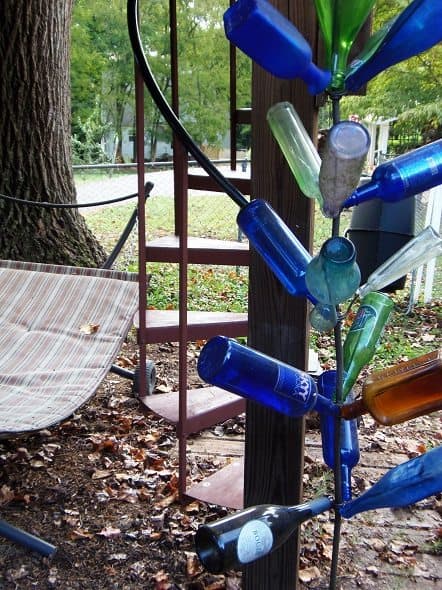 Since we didn’t have to spend on the roofing, I was able to splurge on something fun … a spiral staircase. 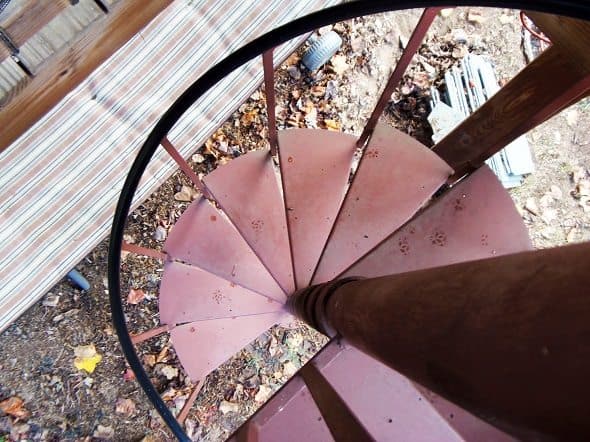 Yep, the treehouse has a spiral staircase. I painted it to match the roof, and mixed a no-slip additive into the paint, so the stairs wouldn’t be slippery when wet. 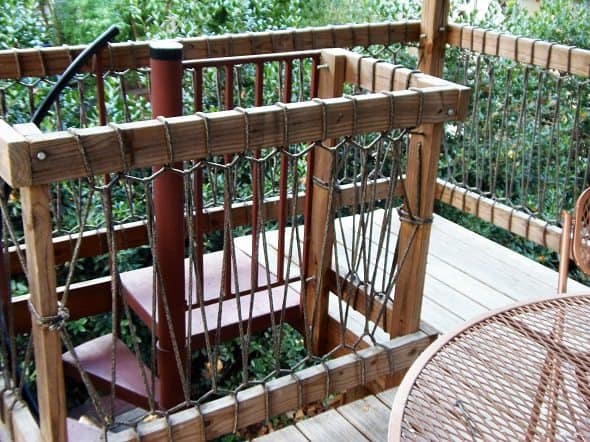 This is where the staircase enters the treehouse. 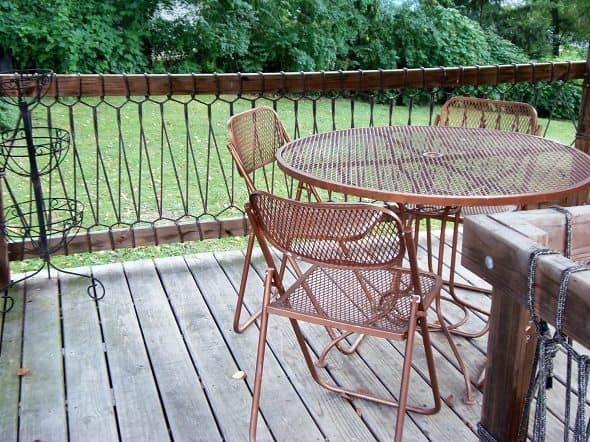 And here’s your first peek at the top of the treehouse. It’s 10-1/2’x 12′, so around 126 square feet. Plenty of room for us. See that table? It came from a curb pile. And the chairs are hand-me-downs from my mother-in-law. After a couple coats of copper paint, you’d never guess they weren’t a set. 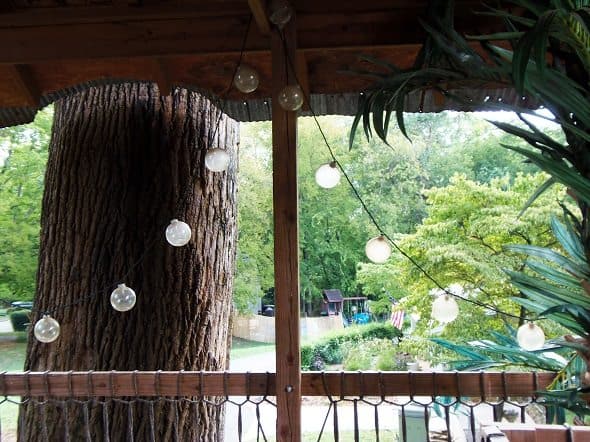 We strung lights in the treehouse, and set them on a timer, so they automatically come on at night. I love looking out the window at night and seeing them. 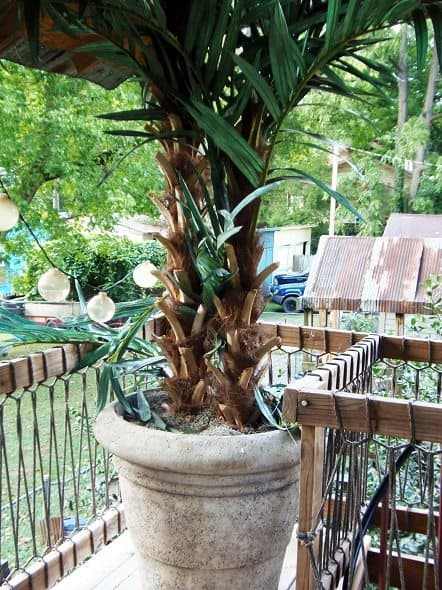 This giant (fake) palm tree fits perfectly in the niche behind the stairs, and it was free. A bank got rid of it when they were redecorating, and our neighbor, who did maintenance work for the bank, brought it home. When he moved, he gave it to us. And now here it is in our treehouse. You know, now that I’m looking at this photo, I think it might need lights, too. Time to pull the Christmas decorations out. 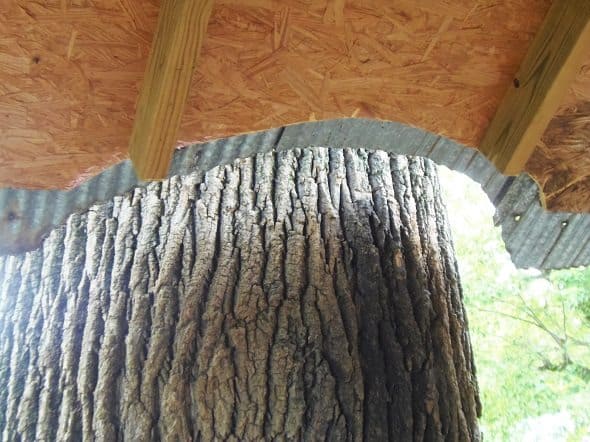 We love our poplar trees and didn’t want to cause them any stress, so no part of the treehouse is attached to the trees. The treehouse sits on 6″x6″ posts, and the roof is built around the trunks. In fact, we recently cut the roof back to accommodate the trees’ growth.

Before I take you back down to show you a few cool features below the treehouse, let me show you the view from up here. 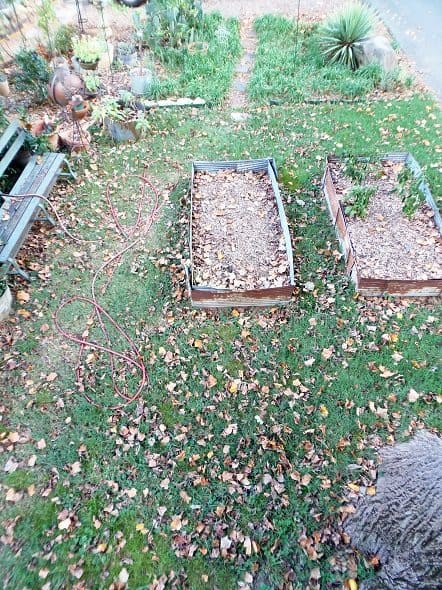 Here’s the view of our side yard. We’re in a drought right now, so even though it’s August, we have leaves on the ground.

That green patch at the top of the photo is my herb garden. And those two raised beds that sit closer in to the treehouse are made out of the same tin that we used for the treehouse roof. 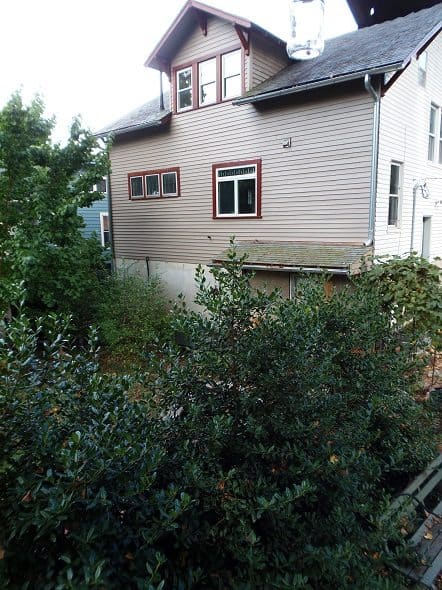 Here’s the view looking towards the house. 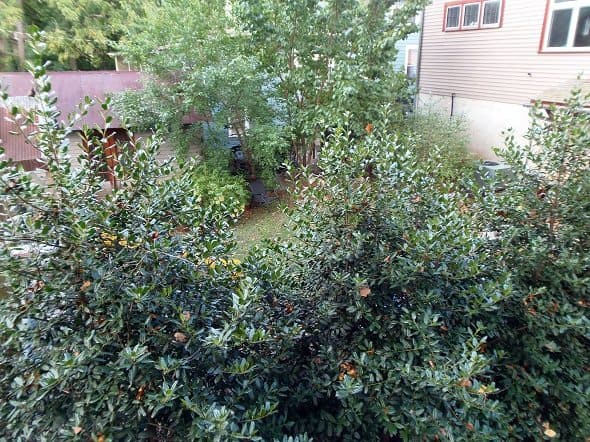 And here’s the view looking towards the backyard. We planted those hollies around the time we built the treehouse, and they’re mammoth now. They’re so much prettier than a fence, and provide a lot more privacy. Which is good because you wouldn’t believe how often people stop to take pictures of the treehouse. And honestly, I don’t mind a bit. Treehouses are fun, and I love seeing people get excited about them. Now the person who built an exact replica of our treehouse a few blocks up … I might mind that a bit. Silly people.

Take a tour of my garden

Alright, if you’ll follow me back down, I’ll show you how we utilized the space under the treehouse. I hadn’t factored that into my design at all, but when we got done building the treehouse, we had this awesome space underneath it. 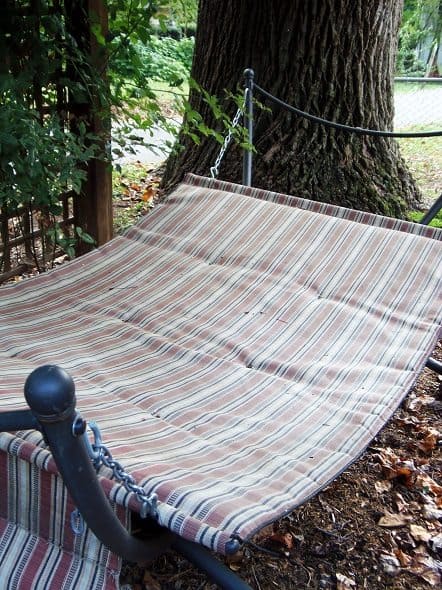 Clearly this 75%-off hammock had to go there. 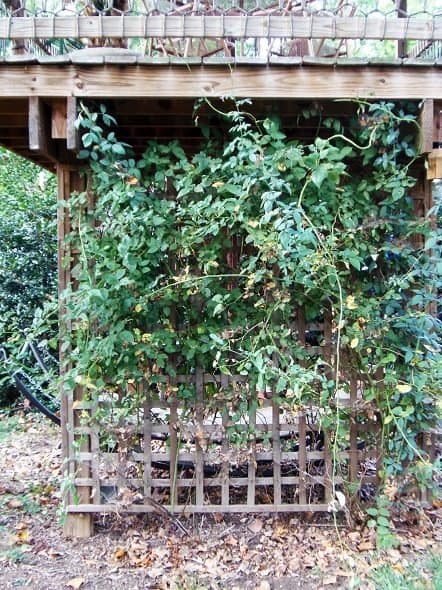 Since the treehouse sits right next to the road (really more of an alley), I added a rose trellis to create some privacy. This area doesn’t get a lot of sun, since it’s protected by the trees’ canopy, so I used a climbing rose variety that can take the shade. And it’s done beautifully. I haven’t spent much time training roses this summer, so it’s looking a little more wild than usual.

At the beginning of the tour, I told you that I built this treehouse for my family, but I really built it for the wildlife, too. Let me show you some things that we’ve added to the treehouse over the years to make it wildlife-friendly. 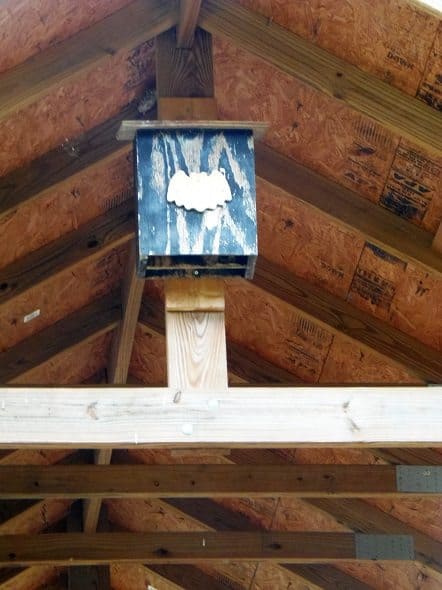 This bat house is hung on the side of our treehouse. We haven’t had any takers yet, but we do have bats in the area, so I’m hoping some will move in eventually. This particular bat house came from a curb pile, but we’ve also built some. Get my instructions for building a bat house. 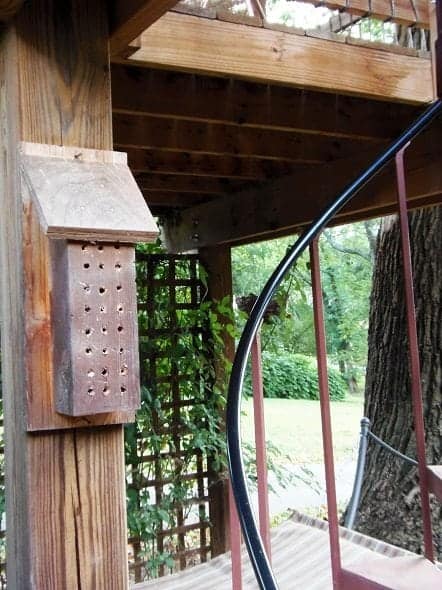 Our treehouse is also a habitat for mason bees (they’re amazing pollinators). Funny story: we hung this mason bee house here temporarily, so I could take a picture to go along with my mason bee house instructions. But, when we went out the next morning to move it to its permanent location, there were already bees in it, so it stayed.

Order one of my mason bee houses 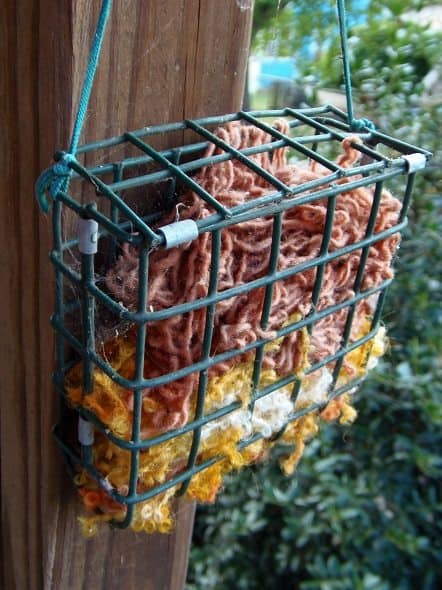 Remember how I mentioned birds like to poach nesting material from our rope railings? I slow down their scavenging by putting out yarn for them. I have several suet cages hanging in the treehouse, and we refill them each spring. I only put out natural colors, so their nests don’t stand out to predators. It’s lots of fun to watch the yarn vanish from the cages. I’m hoping we’ll spot some of our yarn in a nest some time. 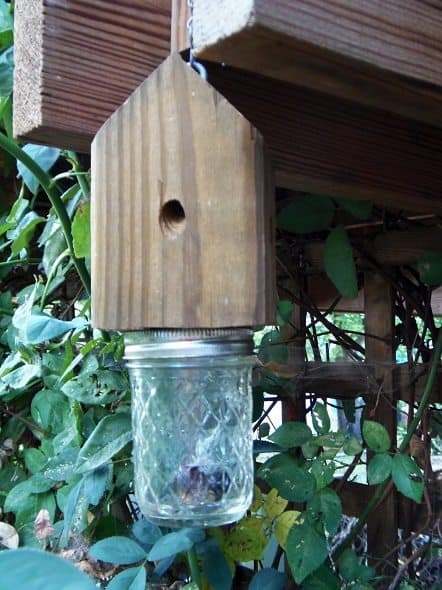 And while we loving seeing our treehouse used as a habitat, we’re not keen on seeing carpenter bees use it as a habitat. They started boring holes in it as soon as we finished building. Grr! That led us to design a carpenter bee trap. This is the prototype. It worked so well for us, we shared the instructions and added them to our shop.

Well, that wraps up the tour of our treehouse. I’ll have another leg of our home tour out soon, so be sure to look for it. In the meantime, here are all the parts of the tour that I’ve shared so far. 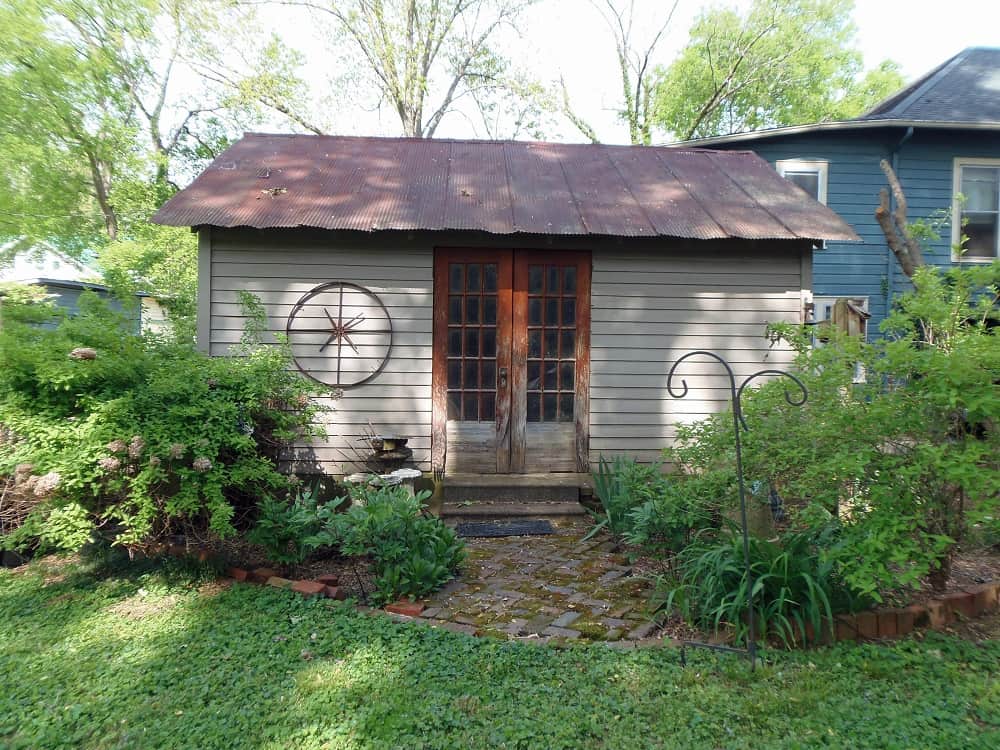 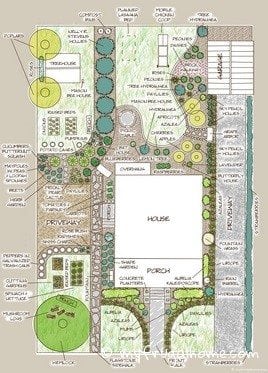 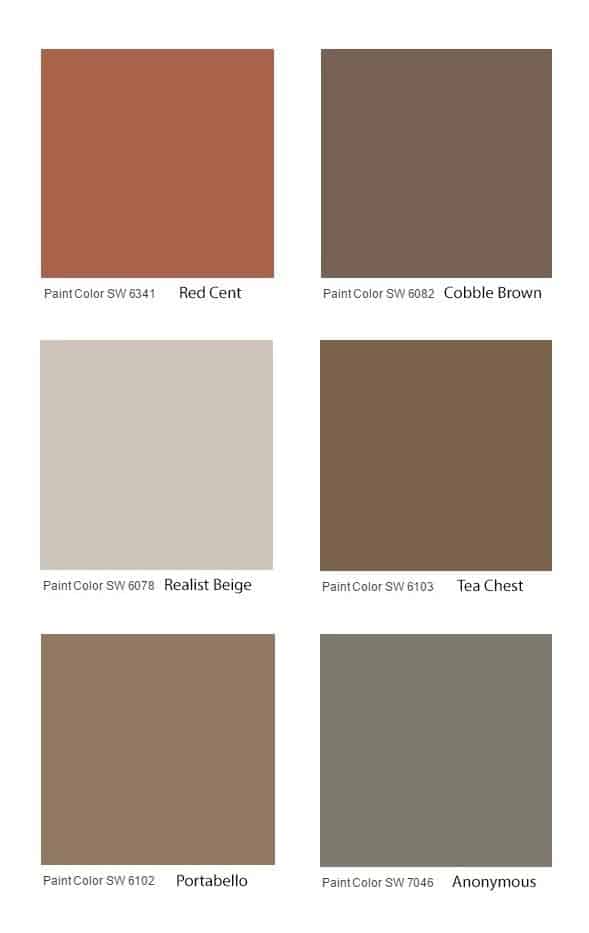 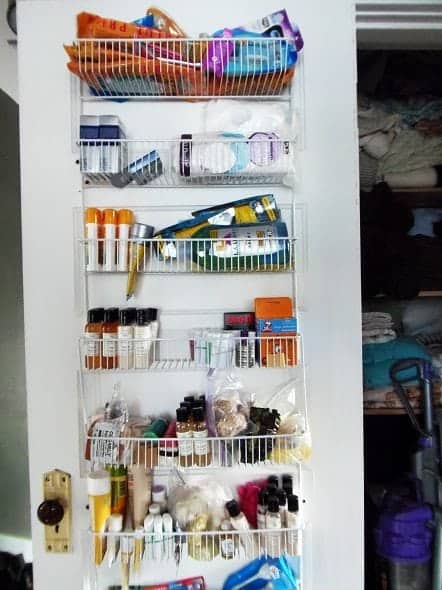 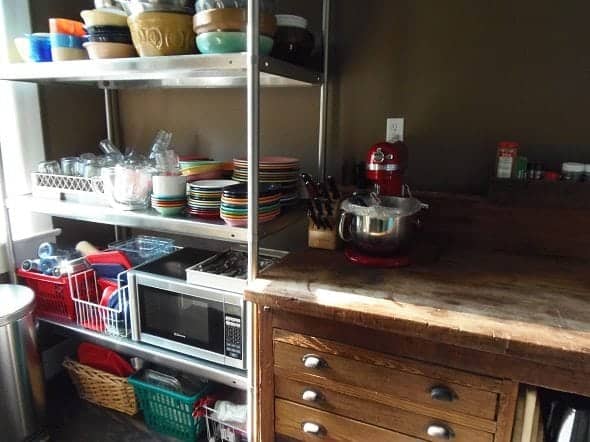 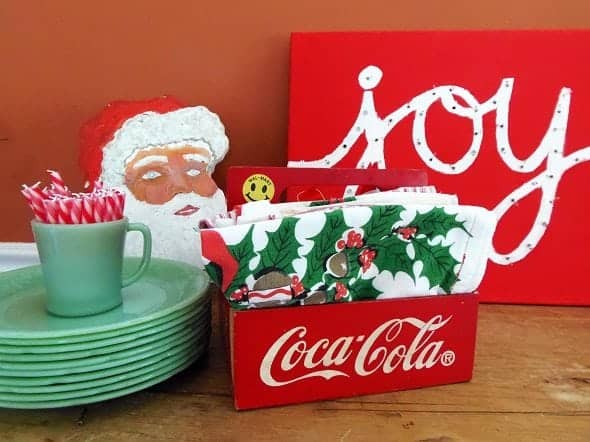