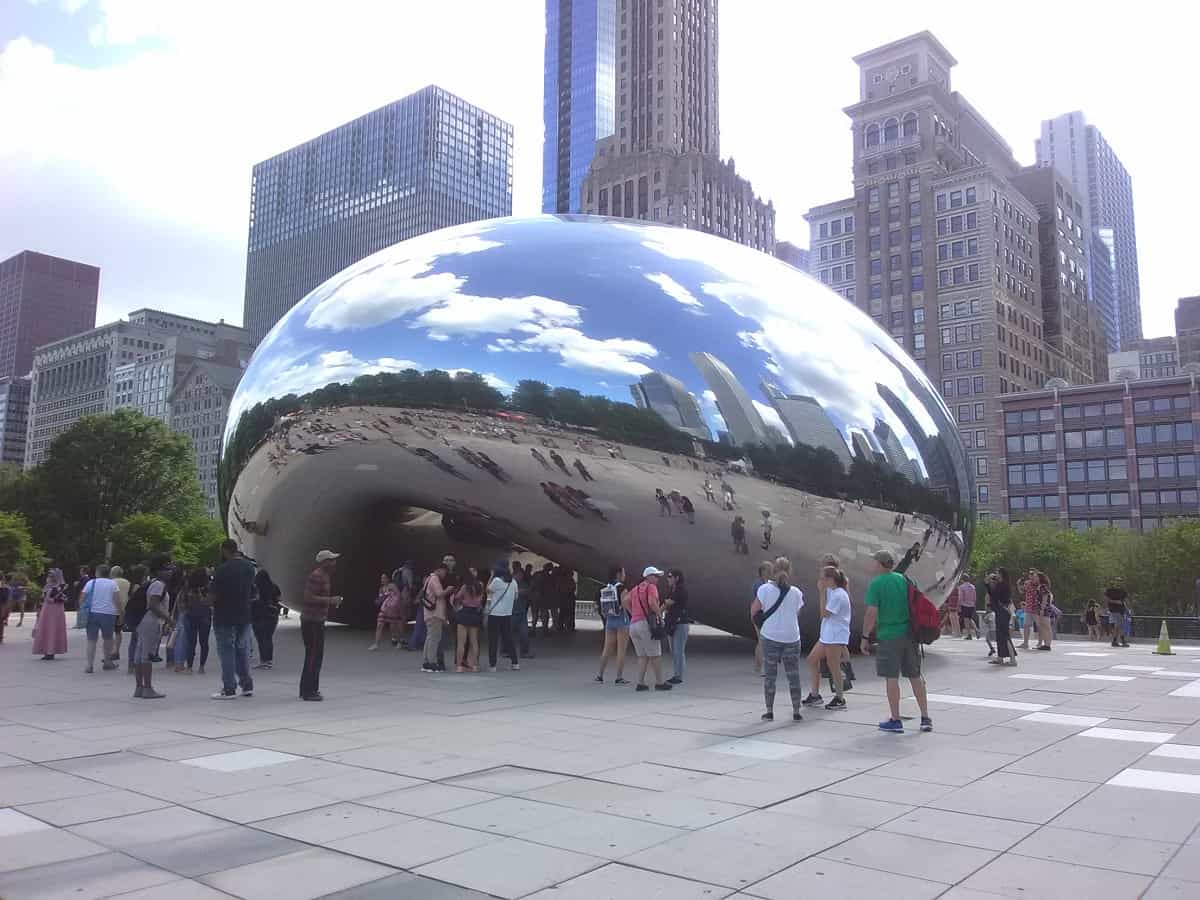 Phew! It’s almost October, and I still haven’t told you about the summer vacation we took back in July. Time to remedy that.

Since I haven’t talked much about our vacations in the past, I should probably start by telling you a few things about the way we vacation. Here’s what you need to know:

1. We aren’t sit-on-the-beach-for-a-week types. Our vacations are full of exploring new places and trying new things. It’s rare for us to stay in one spot for more than a couple days.

2. We don’t tell the girls where we’re going. They get instructions on how to pack, and that’s it. This started eight years ago when we surprised them with a trip to Disney and Universal Studios. It was so much fun, we’ve been planning surprise trips ever since.

3. We usually take a three-week trip. We’ve found that’s the perfect amount of time for us to shake off our day-to-day lives and really do something memorable.

4. We aim to spend on the things that will make our trip special, and look for ways to avoid spending on the things that won’t. On this trip, there were two legs where we allowed ourselves to splurge – and it was totally worth it. Our oldest daughter is a senior in high school, so you may remember that we listed this trip as one of our top financial goals back in January.

Okay, now that you have a bit of background on how we vacation, here’s what we did on the first week of our summer vacation (I’ll tell you about the other two weeks in upcoming posts).

On the first day of our trip, we rented a car, and drove to Chicago. This completely baffled our girls because we never rent cars. When we arrived, we dropped the car off, and spent the next two days in the city. 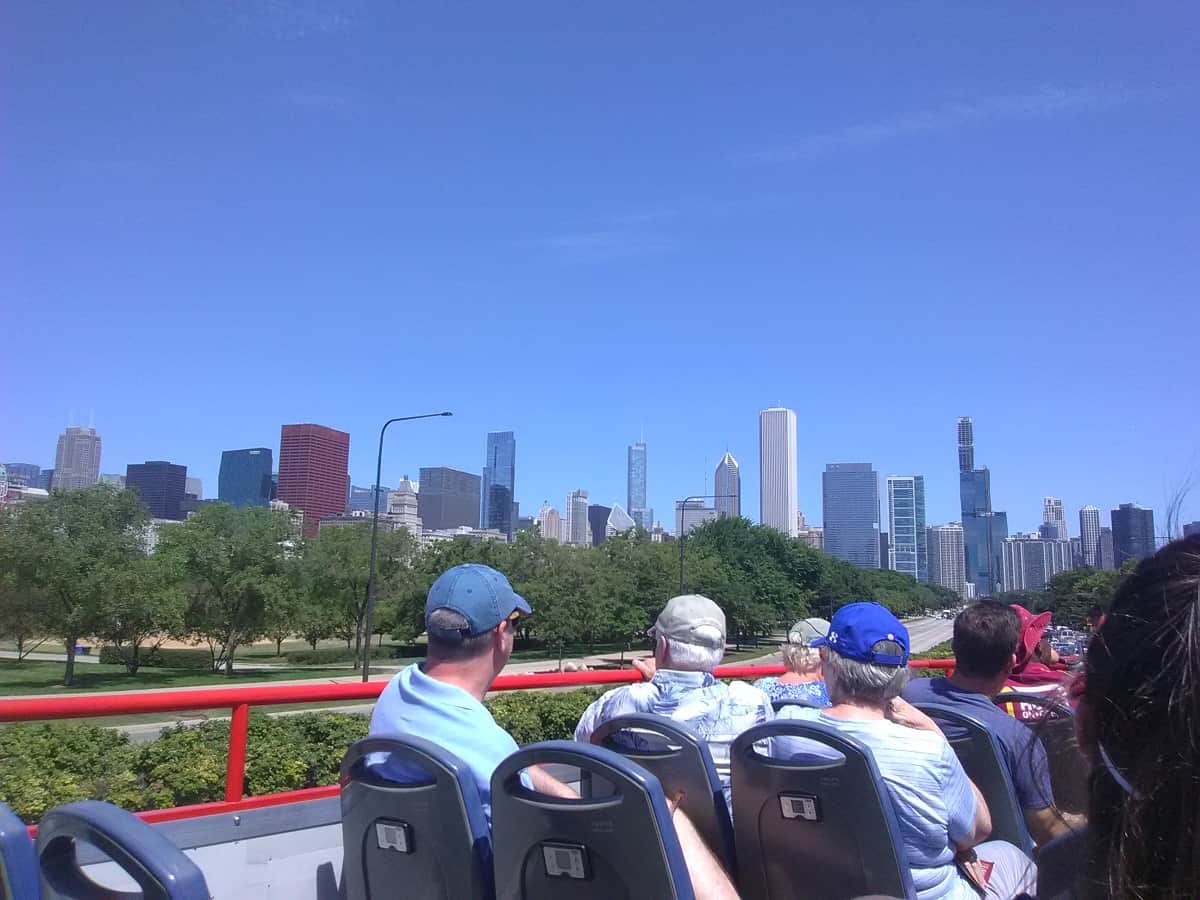 Since this was the first leg of our trip, we splurged on two things that we really enjoyed. The first was a double-decker bus tour. This was the perfect way to see a lot of the city in a short time, and it doubled as our transportation.

The other thing we splurged on was a food tour of Navy Pier. 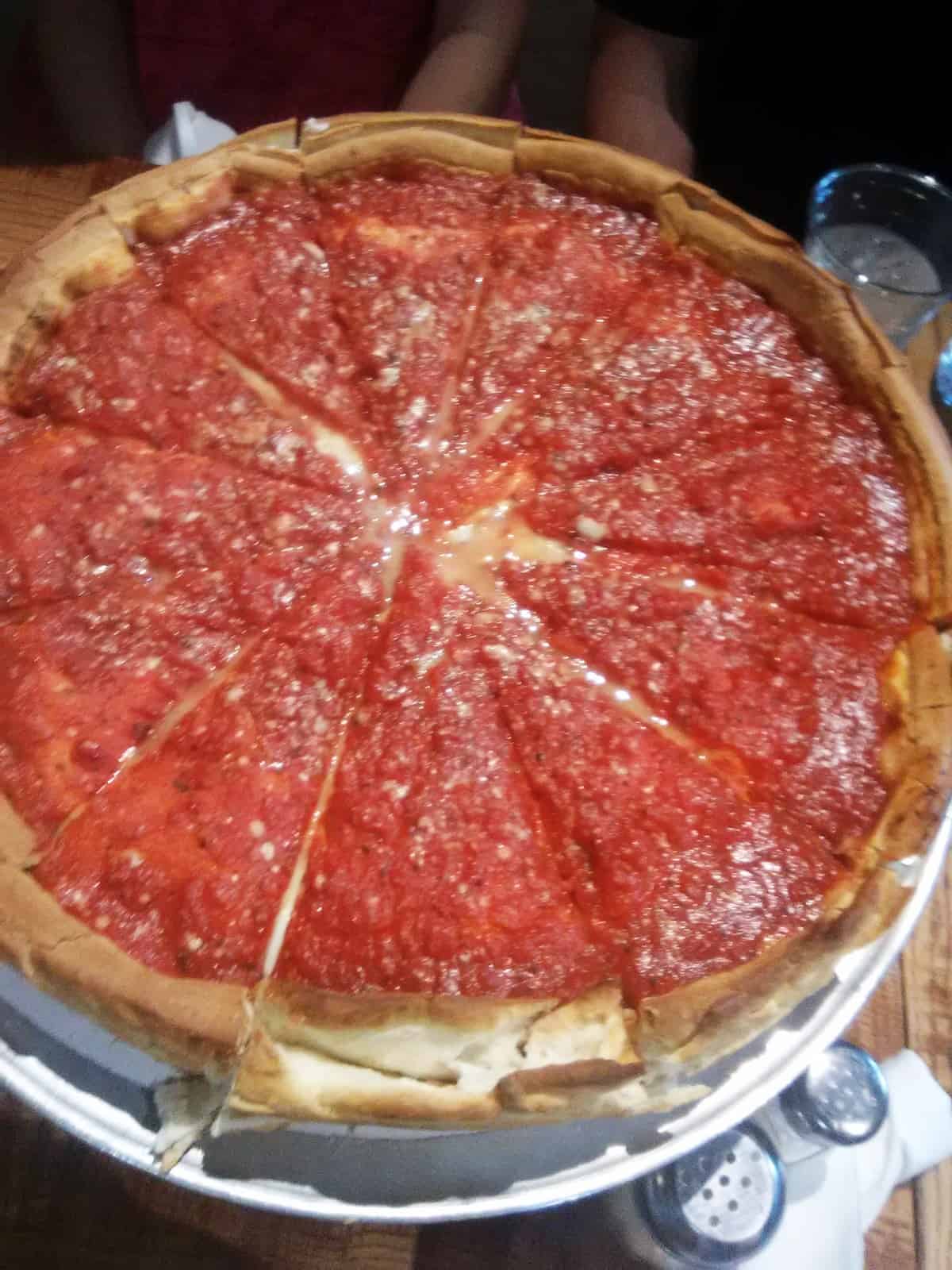 Over the course of two hours, we got to try Chicago-style hot dogs, pizza and popcorn, as well as cheese curds and artisan cupcakes, and we didn’t have to wait in line at any of the popular restaurants that we visited. 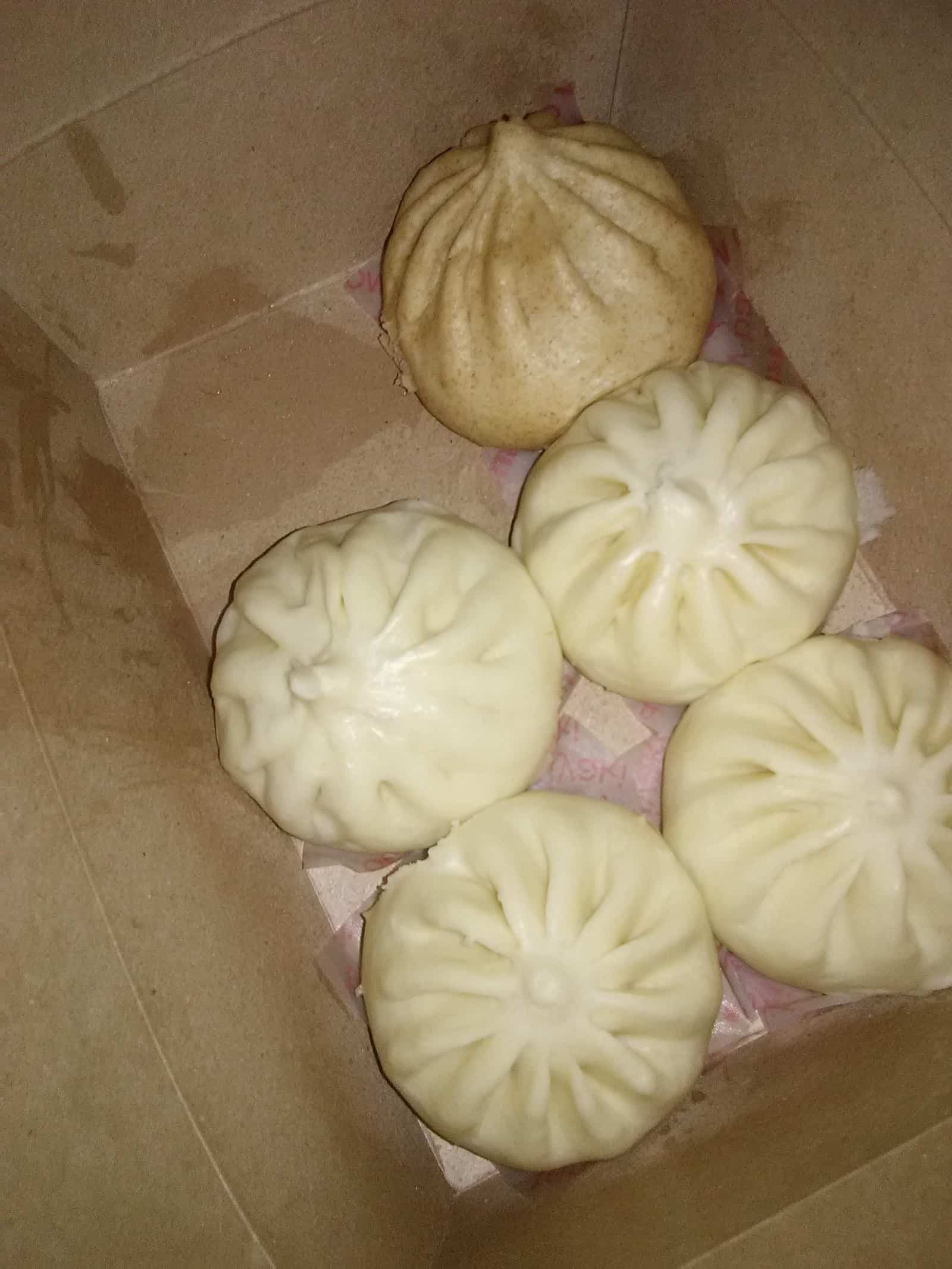 Being huge foodies, we also squeezed in bao (delicious dumplings filled with meats and veggies) and tacos in a bag, while we were in the city – both things we can’t get at home. 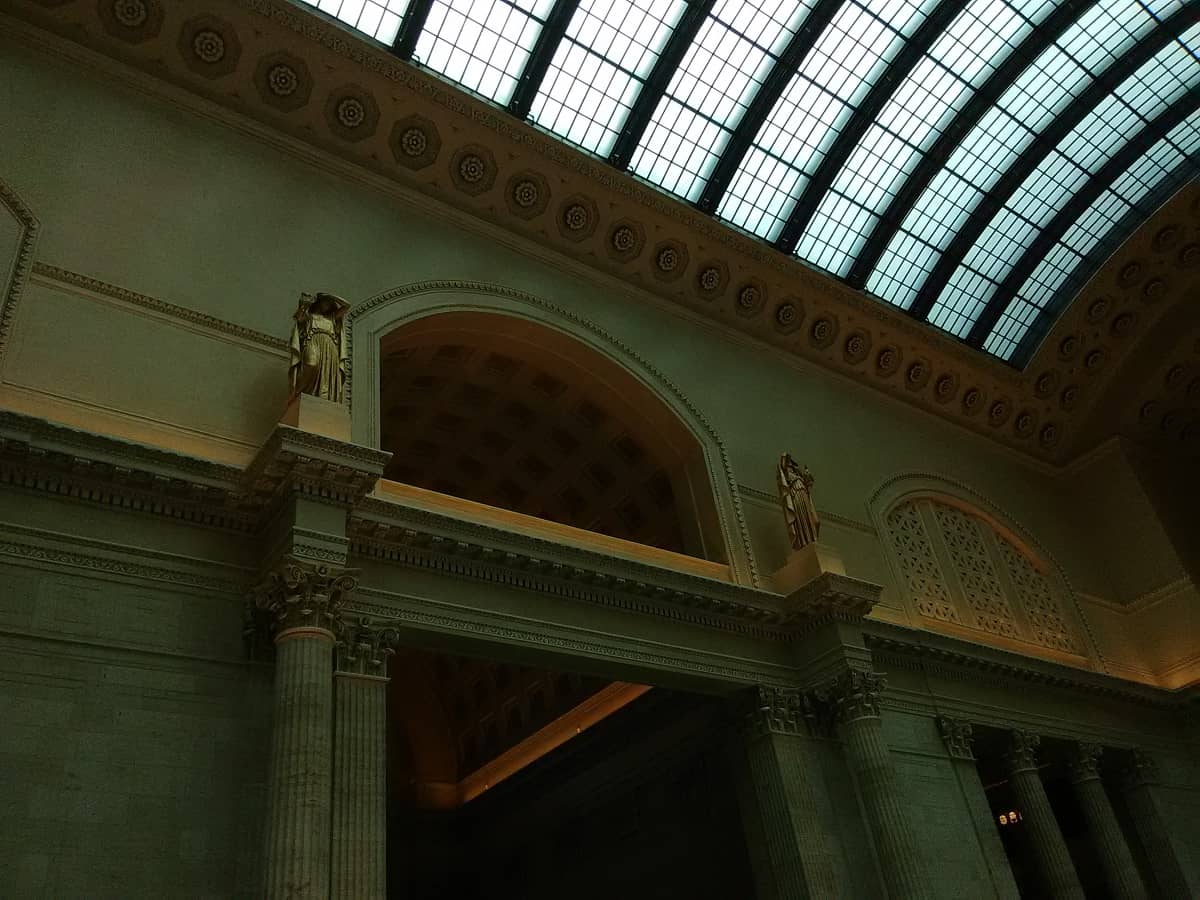 When our two days were up, we took a taxi to Union Station, and jumped on the Amtrak Empire Builder. This was a huge surprise for the girls, since we’d never taken a train before.

Normally, we would have considered this out of our price range, but thanks to a bogo fare sale back in February, we were able to snag four coach tickets from Chicago to Seattle for under $300. Since this covered both our transportation costs and lodgings for two days, it really was a pretty spectacular deal).

To save even more, I packed lots of food for the two-day trip. This kept us out of the dining car entirely. We ended up buying one meal from the cafe, but otherwise ate what we brought. 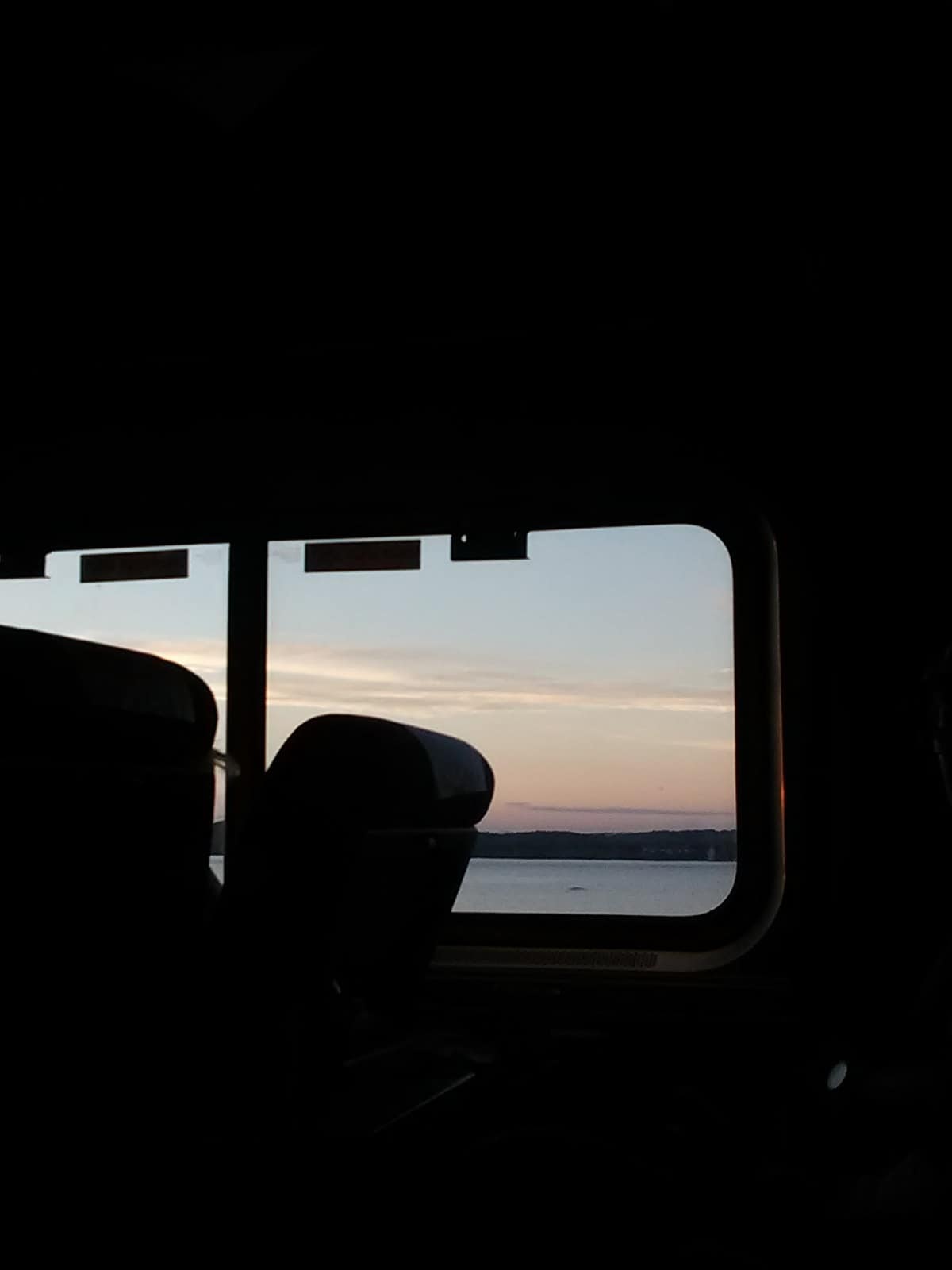 Taking the train was a unique experience, and the view was gorgeous, but at the end of the trip, we all agreed that two days (and nights) on a train is a VERY LONG time. If we do it again, we’ll definitely get a sleeper car, so we have more room to stretch out. The coach seats weren’t very comfortable to sleep in.

That being said, our favorite part of the trip was when we passed through Glacier National Park. The view was phenomenal, and only something you’d be able to see from a train.

When our train finally pulled into the station in Seattle, we hopped on the light rail, and headed to the airport. This had the girls worried that we were about to go straight from a long train ride to a long plane ride, but we had another mode of transportation in mind. 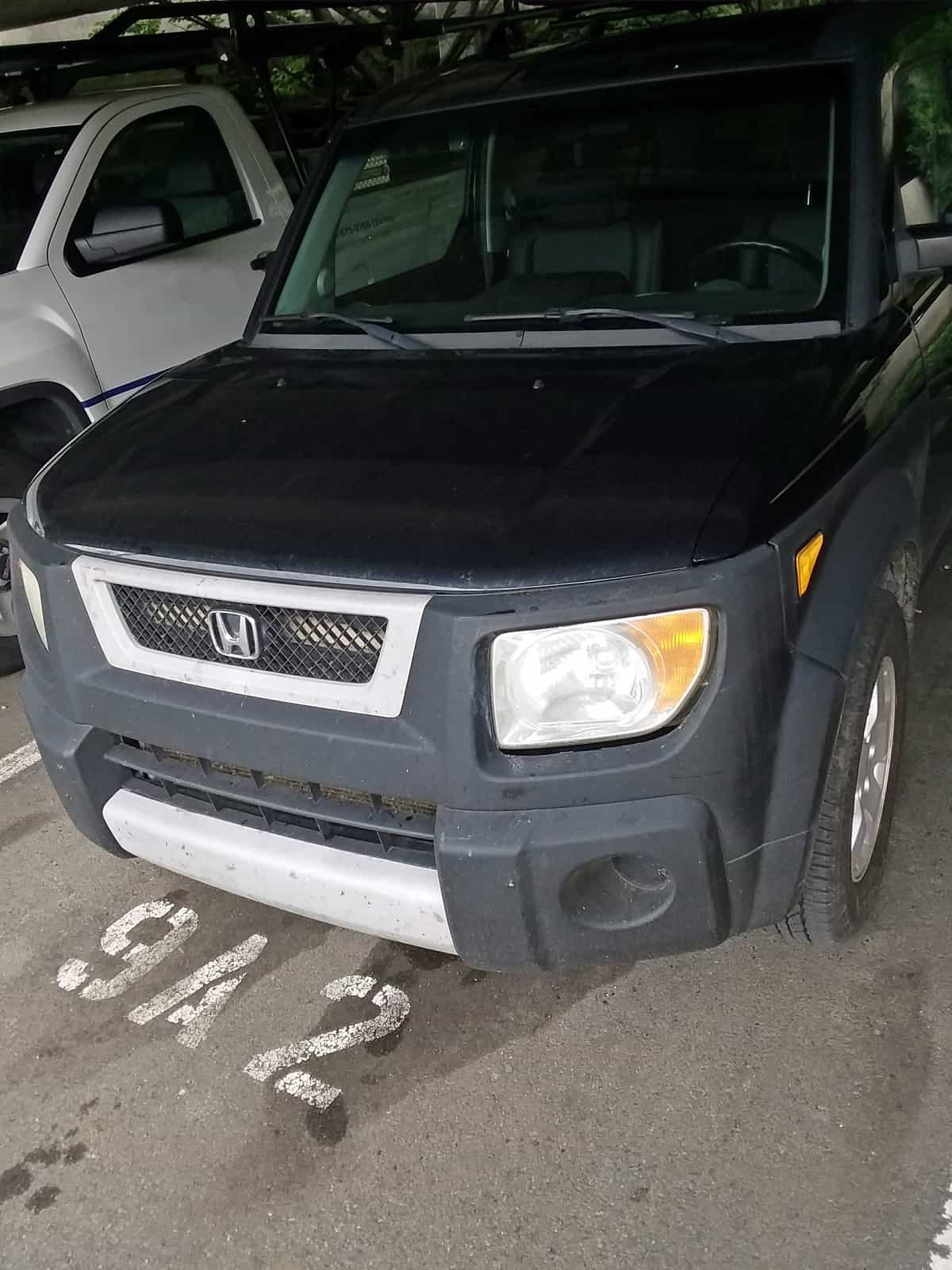 When we were planning our vacation, we considered renting a car for the remaining 16 days of our trip, but the cost was astronomical – so astronomical, in fact, that we considered buying an inexpensive car in Seattle instead. But in the end, we decided the most affordable – and reliable – thing to do was to drive our own car out ahead of time. So, that’s what we did.

Aaron jumped in our Honda Element about a week before our trip, and drove it all the way to Seattle. To save money, he stayed at KOAs along the way, and either van camped or tent camped. Then, he parked our car in long-term parking at the airport and flew back.

This also cut down on how much luggage we had to bring on the train. We instructed the kids to pack one bag with four-days-worth of clothes and another with 16-days-worth of clothes. The 16-day bags went to Seattle in the Element, along with our sleeping bags and other camping gear that we’d use to save money later in the trip.

This plan ended up being even more affordable than we expected. When Aaron was flying back, he volunteered to be bumped from an overbooked flight, and scored a $400 travel voucher (which was considerably more than he’d paid for his flight).

I have to say, after two days on the train, everyone was happy to see our own car.

We headed into the city for lunch at Pike Place Market. Then, checked out a few shops, and took the ferry to Bainbridge Island.

Aaron had become fascinated with Sequim, Washington, after reading that it sits in the rain shadow of the Olympic Mountains, and therefore receives less than 16 inches of rain each year. So, we included it as a stop on our trip. 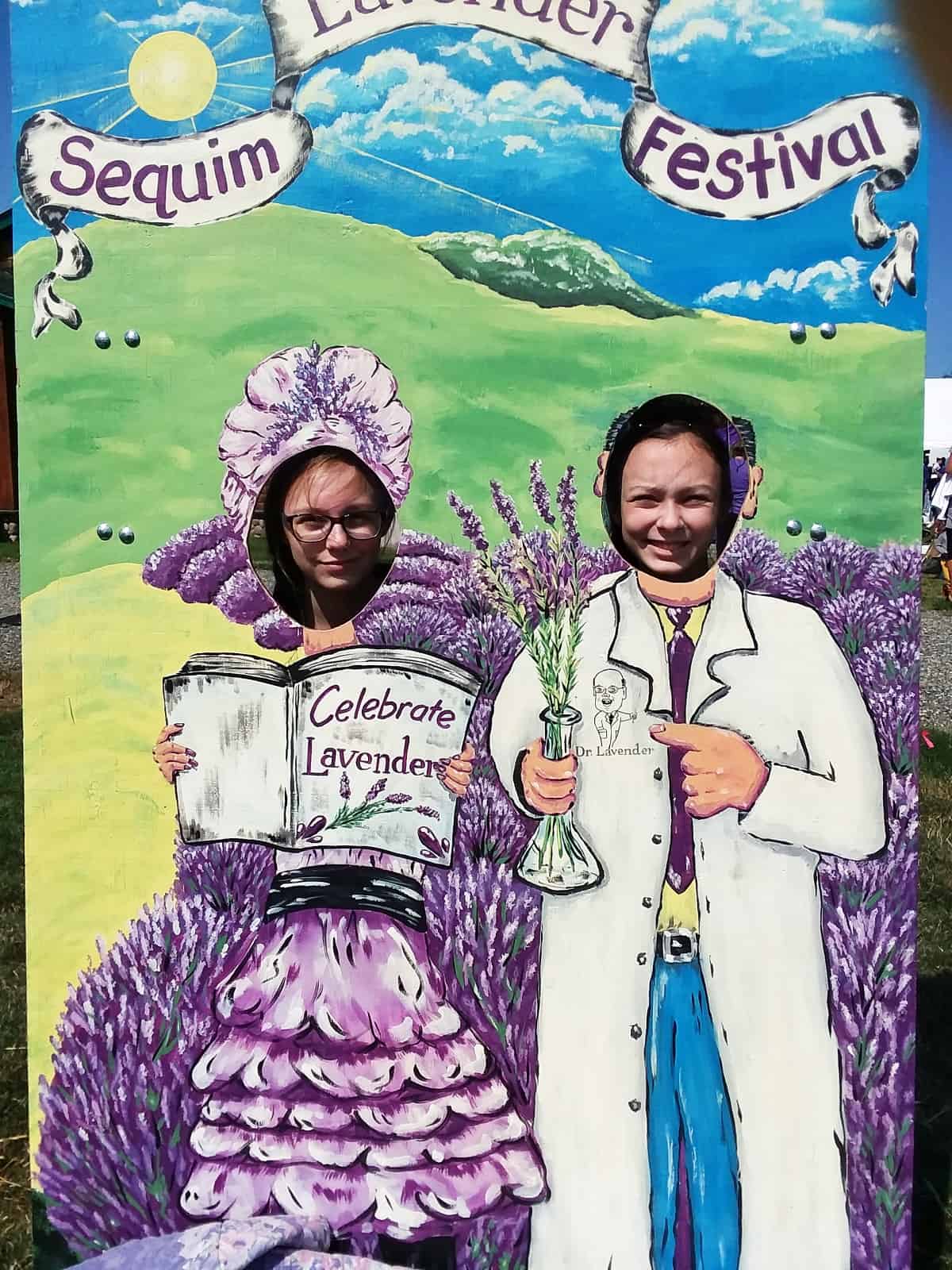 The unique climate makes it ideal for growing lavender, (it’s known as “The Lavender Capital of North America”), so we timed out trip with the Sequim Lavender Festival.

We walked around, and looked at all the lavender crafts and products, and even sampled a few foods made with lavender, including lavender ice cream. Yum!

Then, we jumped back in the car and headed to Cascade Locks, Oregon. 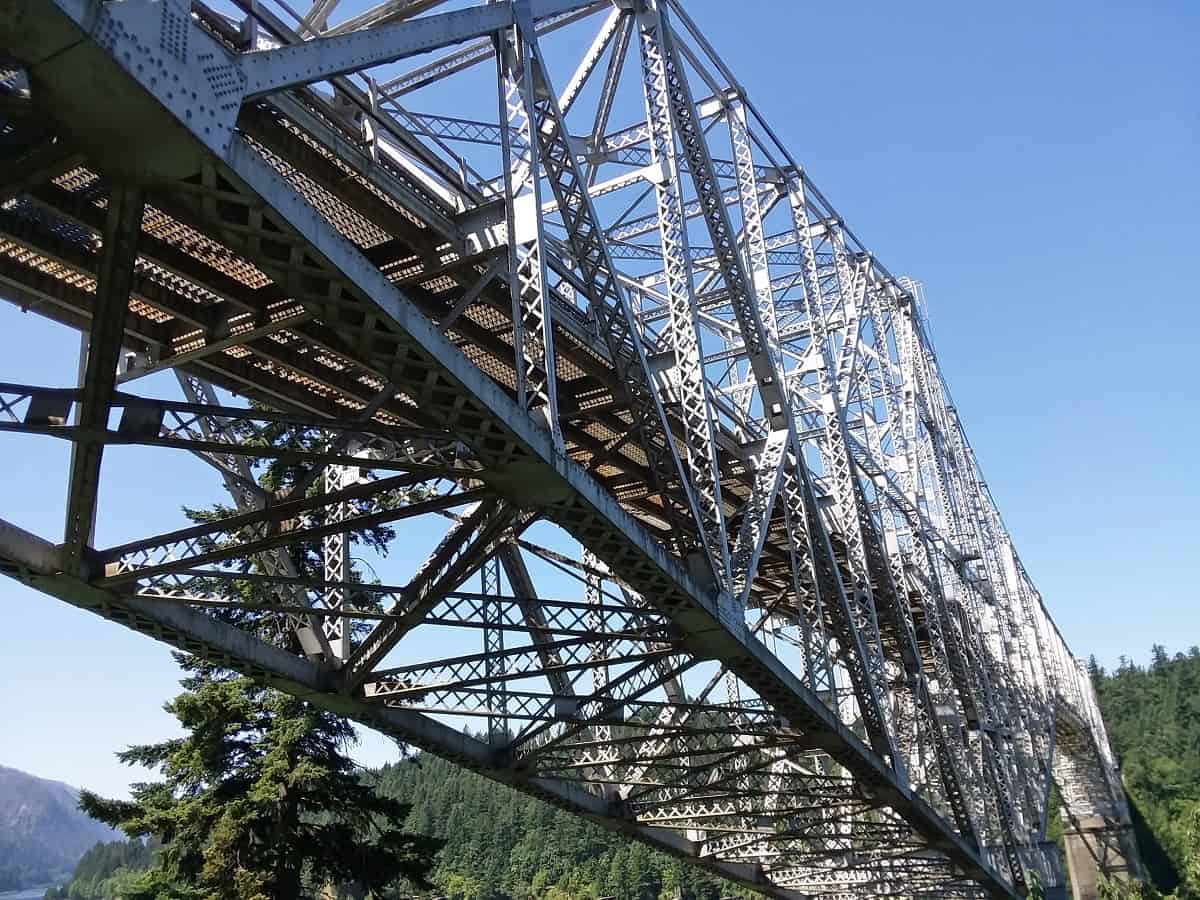 We originally planned to spend the night at the Cascade Locks KOA; then, head into Portland for half a day. But when we saw how gorgeous Cascade Locks was, we immediately scraped that plan. Instead, we hit a yard sale; then, spent the rest of our time hiking a small portion of the Pacific Coast Trail, including the Bridge of the Gods.

Half a day wasn’t nearly enough time. Sometime I’d like to do an extended trip to Oregon. 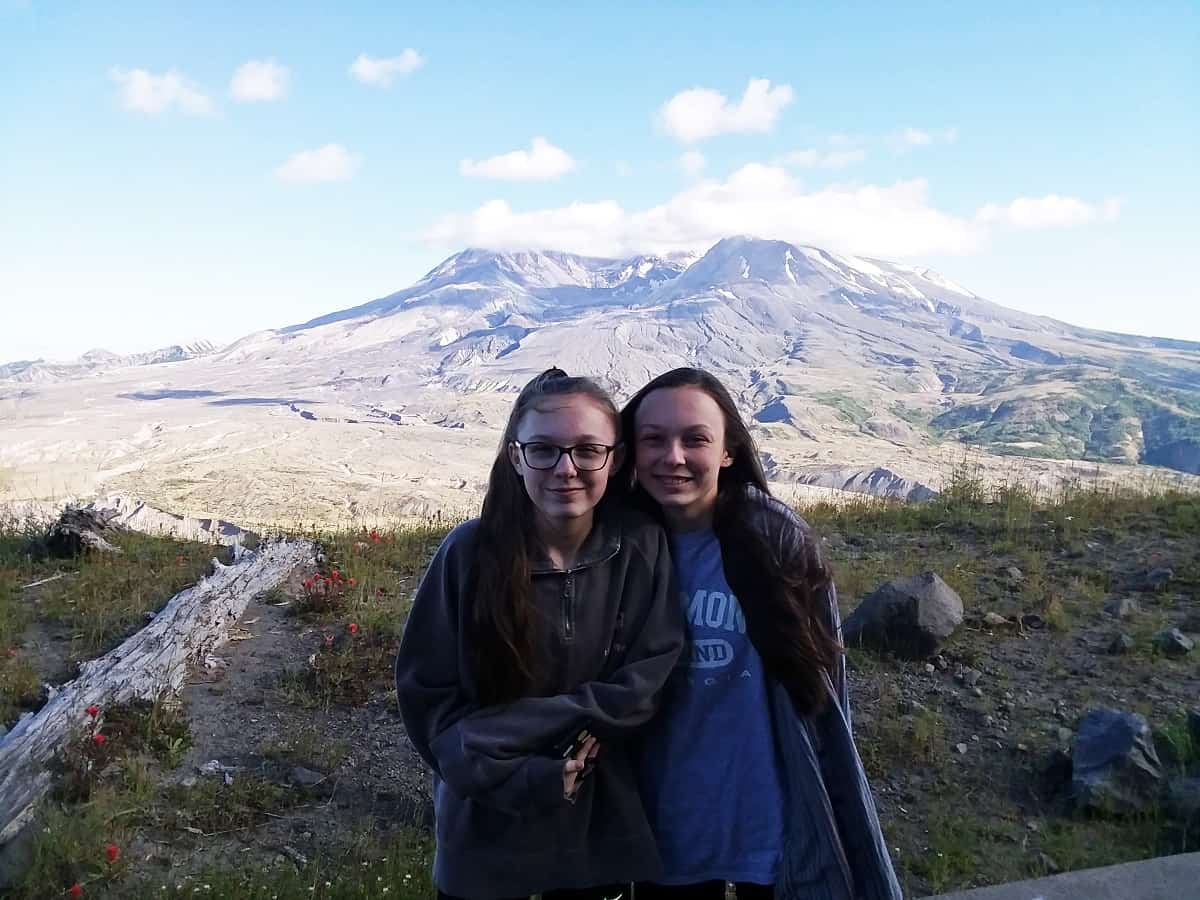 After a bit of driving we arrived at Mount St. Helens. It was close to closing time, but we still had plenty of time to hike one of the trails … 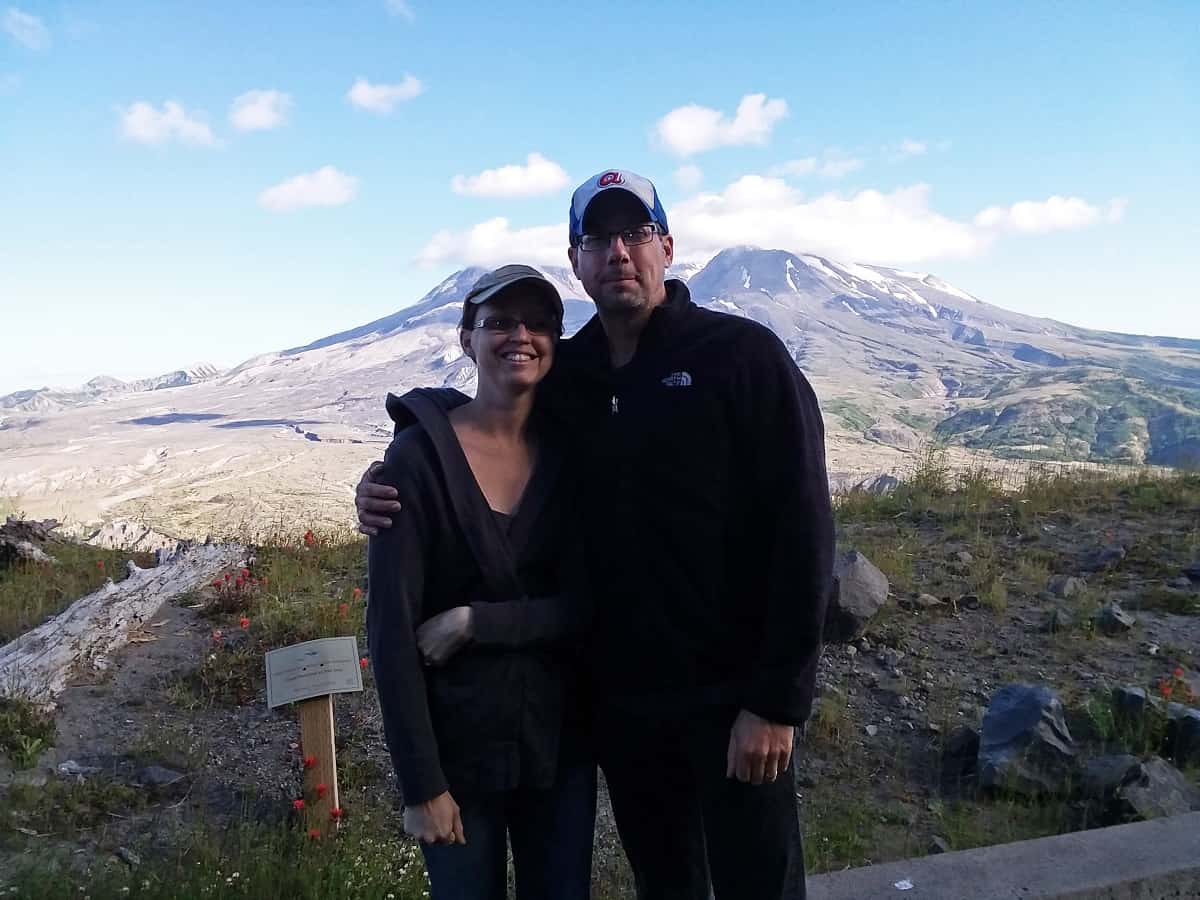 and get a good view of the volcano. 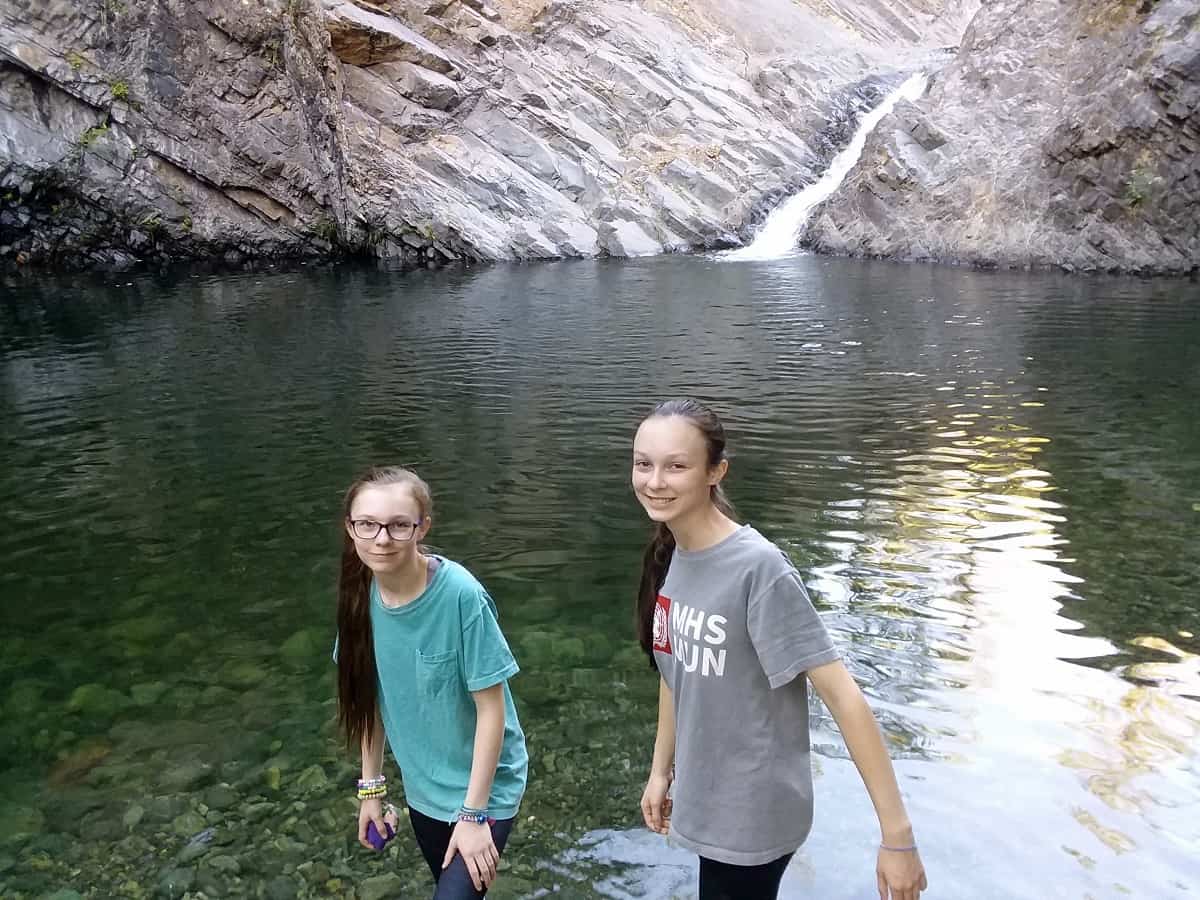 We were planning to surprise the girls with a teepee stay at the Grants Pass KOA that night, but when we arrived we discovered they’d lost our reservation. Apparently, they’d updated their reservation system earlier in the year, and our reservation hadn’t gotten transferred over.

To further complicate matters, they were fully-booked for the night. Not good.

They offered to let us tent camp for free, but we only had a two-man tent with us, and our car was now too full for van camping (we had picked up some work equipment along the way). So, they offered us a tent and set it up, too.

This little snafu ended up saving us $130, since staying in the teepee was one of our splurges. And you know what? None of us minded the change of plans.

In fact, we loved the swimming hole and waterfalls on the property, and would definitely go back again.

Well, that officially takes us through the first week of our summer vacation. I’ll be back to tell you about the second week. 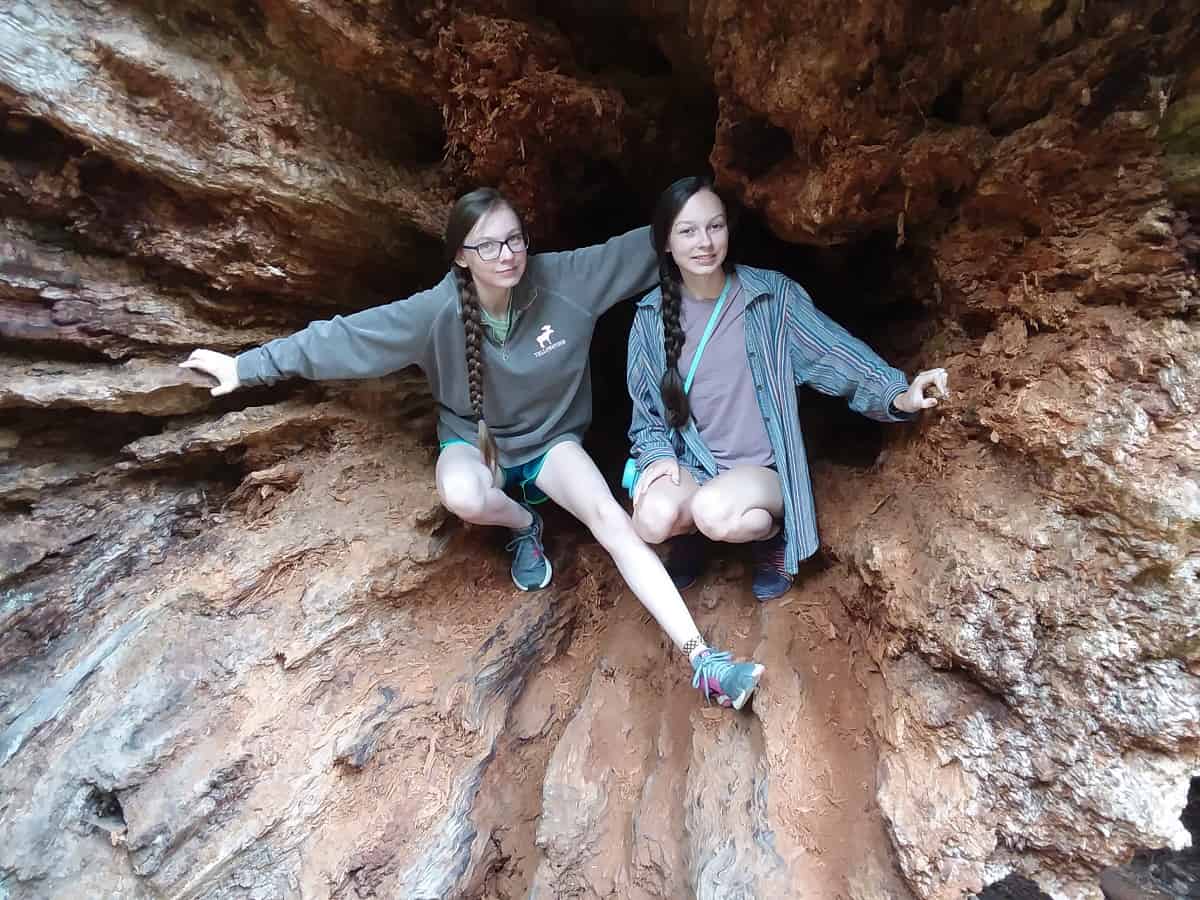 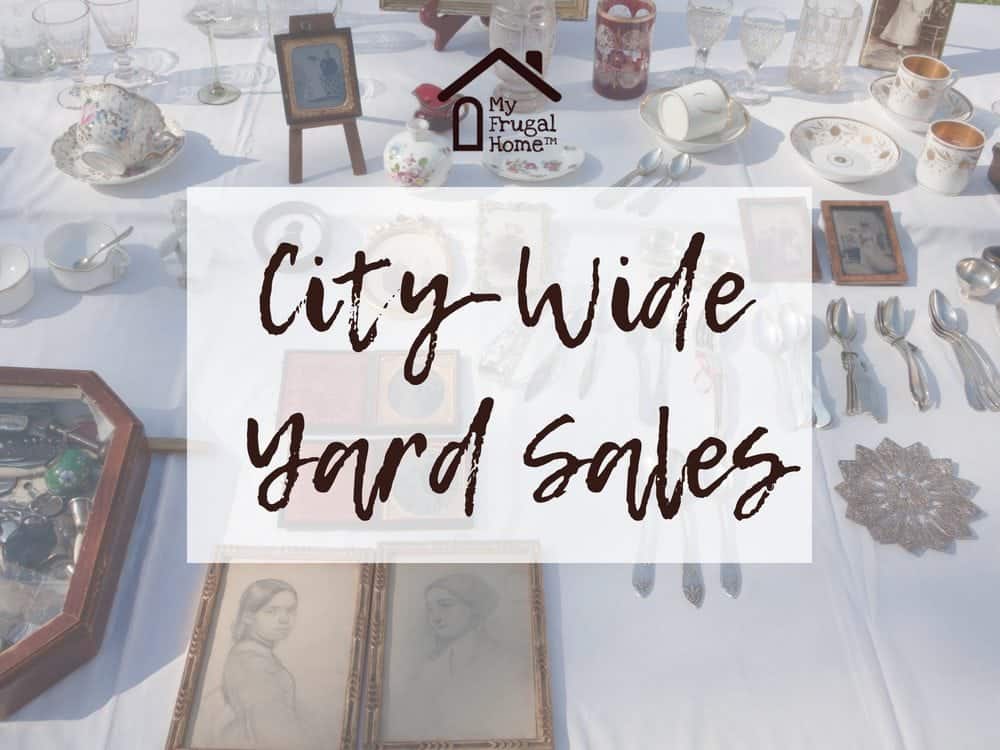 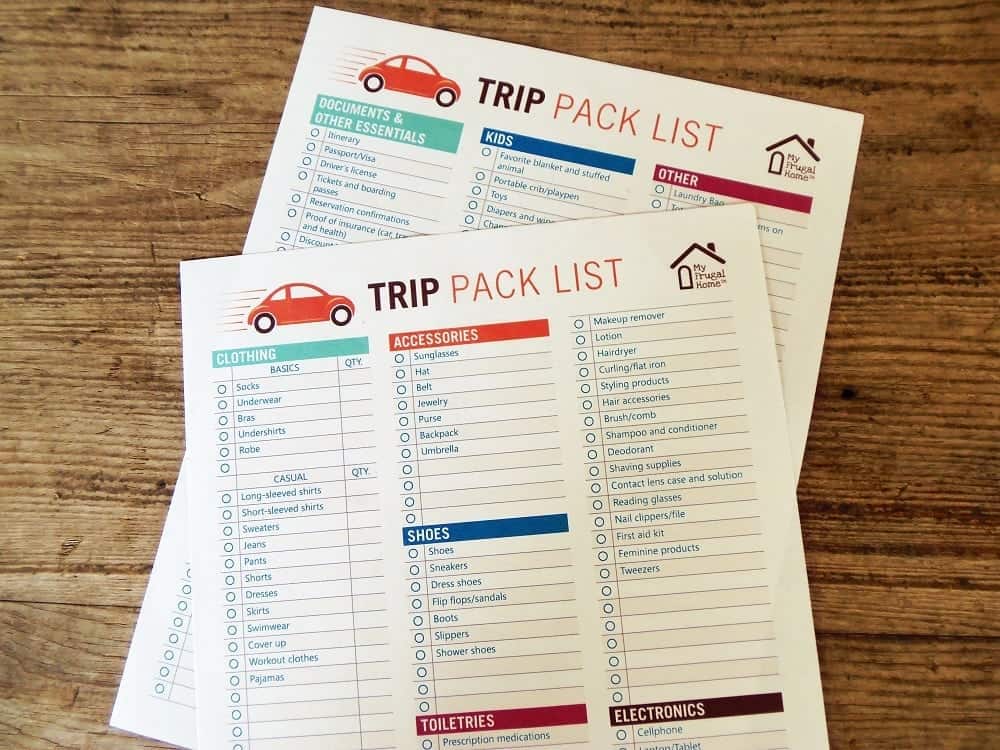 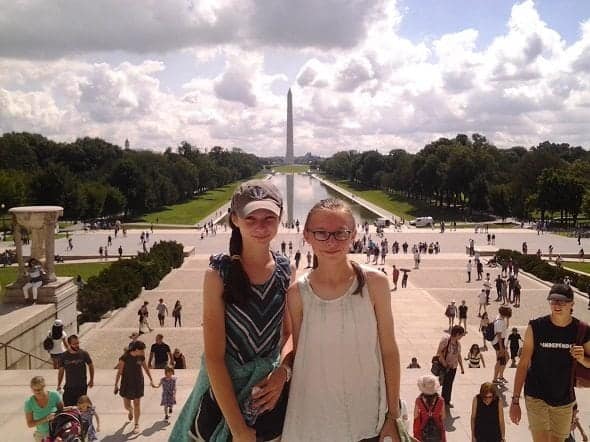 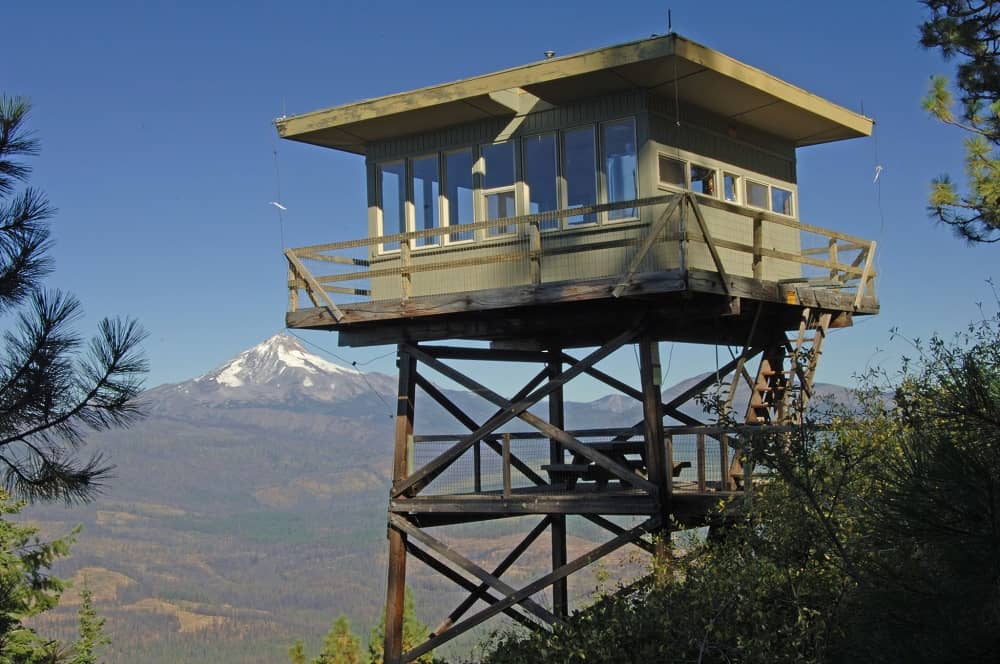 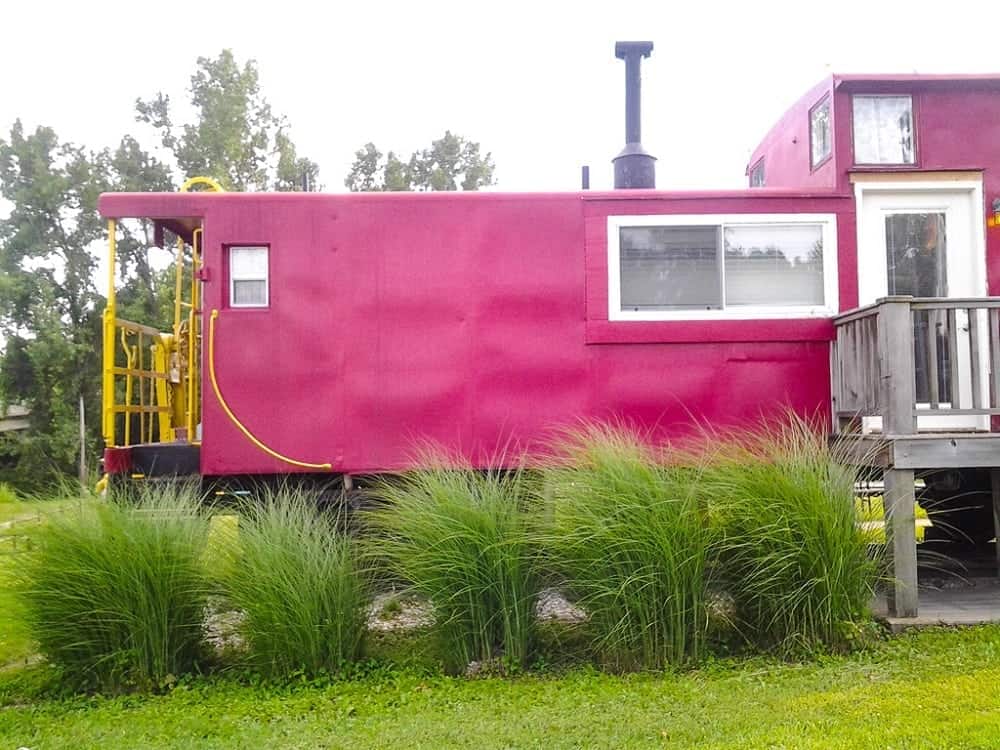