You are here: Home / Gardening / Raising Rabbits / We Got an Angora Rabbit! 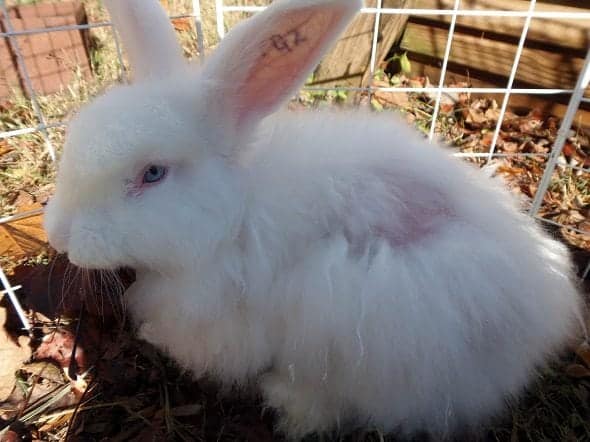 We Got an Angora Rabbit!

I’m so glad it finally stopped raining. We need all the rain we can get to help with the drought and wildfires here, but I’ve been dying to introduce you to our new angora rabbit. We got her Saturday.

I’ve wanted angoras for quite some time, and had slowly been assembling all the gear at yard sales. We had plans to build a hutch, but ended up finding one at a yard sale this summer for $20 (can’t beat that). It had been sitting empty just waiting for the right opportunity to present itself. That finally happened last weekend.

We set up at a two-day holiday craft show near our cabin. I knew ahead of time that there would be a fiber artist in attendance, who raised angora rabbits, so I was eager to talk to her while we were there.

She brought two of her angora rabbits and one of her angora goats with her each day. She also brought her spinning wheel, so she could spin yarn directly off of the rabbits. It was lots of fun to watch. The girls were absolutely mesmerized. I wish I had thought to take pictures. 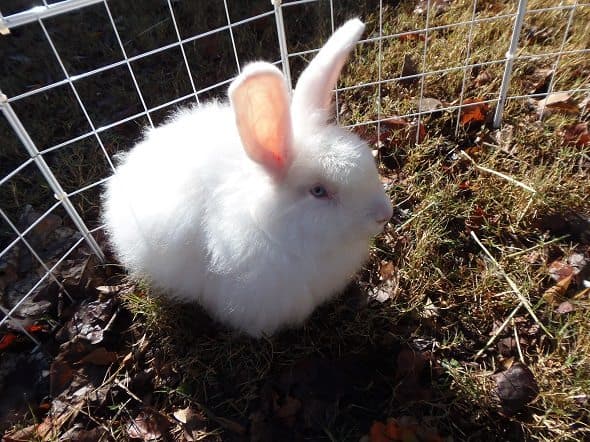 When there was finally a break in shoppers, I went over to talk to her about angoras, and told her I’d been looking to buy some. I was hoping that she would invite us to come pick some out from her rabbitry, but she surprised me by offering to sell one of the angoras that she had brought with her.

After seeing how calm this rabbit had remained all day, while having her wool spun, and having countless visitors pet her, I was thrilled with her suggestion. We agreed to pay $50 for her (very fair considering she came with her papers), and made plans to bring her home the next evening after the show wrapped up.

Why I Picked an Angora

As a kid, I pretty much always had rabbits. But they were just pets; we didn’t raise them with any purpose in mind. As an adult, I tend to take more of a farmy approach to pet keeping. I like when the animals I’m caring for are giving something back in return. So, we raise our chickens for eggs, and we’ll be raising our angora rabbit for her fiber.

I’ve always enjoyed felting and dying projects, so I’m looking forward to working with her wool. I don’t currently knit or crochet (my mom hates to sew, so I never learned how), but I have the feeling that’s going to change.

And while this probably won’t come into play unless we get more angoras, the fiber commands a pretty penny. It sells for upwards of $7 an ounce unspun, and you can easily get $40 for a small skein of angora yarn. I’m on the lookout for a spinning wheel.

The lady we bought her from offered to allow us to breed her with one of her bucks, and I think we’ll probably take her up on that sometime. I’d like to build up our numbers, but I also have interest in raising angoras to sell. It would be another income stream for us. In our area, angoras tend to sell for $50 to $75 a piece (more with their papers). As I mentioned earlier, our angora did come with papers. That was important to me, since I wanted to leave open the possibility of breeding angoras to sell. 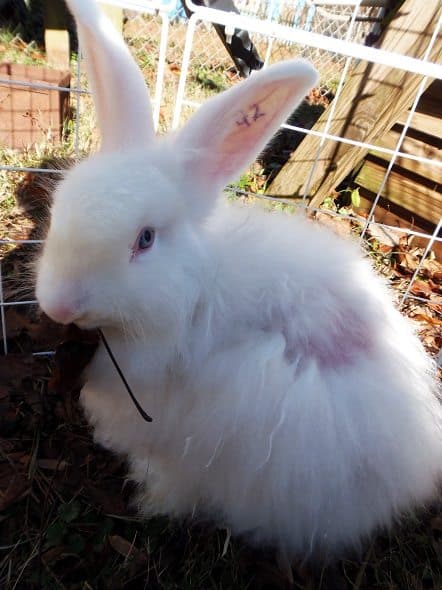 Those thin patches in her coat are from the spinning.

More About Our New Arrival

We debated names on the way home, and decided to call her Yarn. I’m sure you can guess why. Yarn is eight-months-old, and she’s a white satin angora. Specifically, she’s 75% satin, 12.5% German and 12.5% French. She was bred to have blue eyes. But all of those percentages and details aside, the bottom line is that she’s as sweet as can be. She’s used to being held and pet, so she’s adjusted to her new home and to us quickly. She’s super affectionate, and quite intelligent. The kids have been really good about keeping her groomed.

The Care and Keeping of Angora Rabbits

I’m sure I’ll be writing more about how to care for angoras in the coming months, but I do want to touch on it a bit here. Because angoras have such a dense coat, they do require more care than other rabbit breeds. Unlike a cat, they’re not able to cough up fur balls, so they’re susceptible to developing wool block. That’s when wool builds up in their intestines, as the result of them cleaning themselves, and it can be deadly. Because of this, angoras require special food, and regular grooming. They are, in short, high maintenance pets. So, while I have plans to add more angoras over time, I think it’s good that we’re starting with one. It’ll give us a chance to get used to our new responsibilities.

Sign up for my newsletter
FILED UNDER: Raising Rabbits