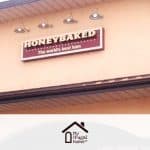 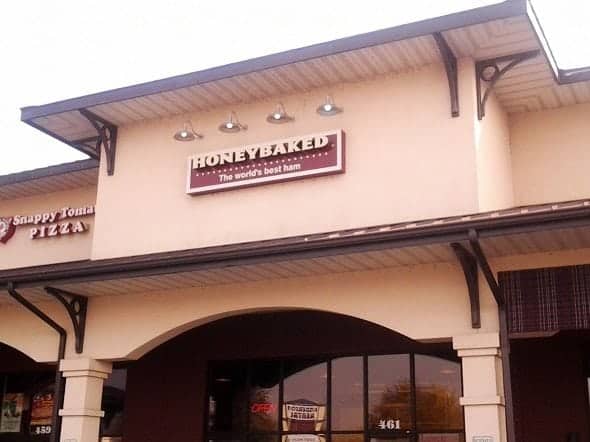 Two years ago, my husband took a holiday job as a driver’s helper for UPS. This year, he decided to take a holiday job at HoneyBaked Ham. If you’ve ever wondered what this job entails, we’re here to tell you.

Why We Picked HoneyBaked Ham

After the UPS gig, we knew we needed to find a seasonal job that was a better fit for our family. For us that meant a smaller time commitment and no evening hours. With the UPS job we never knew what time my husband would be getting off work, and he missed out on several holiday events. We didn’t want that to happen again.

So, HoneyBaked seemed like the perfect fit for us. He went in two mornings last week for training, and worked about three hours each time. This week, he’s scheduled to work three mornings from 8:30-1:00, and next week (Thanksgiving week), he’s scheduled to work four days from 8-2. With the exception of next Sunday, he’ll only be working week days. If he chooses to, he can also work the two weeks leading up to Christmas.

Since we’re self-employed, this schedule is ideal for us. He heads off to HoneyBaked after he drops the kids off for school, and he’s home before the kids get out of school. This leaves his afternoons open to fill shop orders, and help me with whatever projects I have going for the site.

What the Job Entails

My husband was hired to be one of the ham and turkey glazers, so he’s working at the back of the store. This means he can pretty much wear whatever he wants to work, as long as its not his Sunday’s best or one of his favorite outfits. While he spends most of his time glazing the hams and turkeys, he’s also responsible for cleaning up his work area and the equipment that he used.

The hams and turkeys arrive at the store cooked, and the rest of the prep work is handled in assembly line fashion. During the holidays, each employee is assigned a specific task to perform. One person unpacks the hams and turkeys, while another person or two glazes them. Then, someone else inspects the glazing, and if they’re up to HoneyBaked’s high standards, the hams and turkeys get wrapped in foil. After they’re wrapped, they’re weighed and labeled; then, transported to the cooler for sale or customer pickup. Our local store employs up to nine people on the line during the holidays.

The store he’s working at pays its seasonal workers $8.50 hour, so it’s not a high-paying gig, but it does comes with some pretty sweet benefits. While this may vary from location to location, he receives a free lunch each day he works, and he’ll receive a free ham or turkey for Thanksgiving. If he decides to work the two weeks leading up to Christmas, he’ll receive another one.

We’re really busy this time of year, so it’s quite a treat to have lunch covered on the days he works. He brings home a combo, and we split it.

And when you consider that their hams can easily run $60-$70 a piece (or more), getting two of those for free is a pretty nice bonus. I’m looking forward to filling the freezer with free ham.

How Much He Made

My husband ended up working a total of seven days, (plus two training days) in the two weeks leading up to Thanksgiving. That added up to 34.37 hours of work and $292.16 in earnings. On his last day, he was told he could pick out any ham he wanted. They even showed him where the biggest hams were. He came home with an $89 ham! As promised, he also received a free lunch every day he worked (usually that was a HoneyBaked combo, but when they hit crunch time, they started bringing in take out food for all the employees).

When you add in the value of the ham and those lunches, that brought his hourly rate up to around $12.52 an hour. Not bad for a temp gig.

He had the option of working the Christmas rush, too (which is longer), but we decided to skip that, since he would have been working while the kids were out on Christmas break. They said he was welcome to come back for the Easter rush, if he wants. Most of the people who do this come back year after year.

Would He Do It Again?

Maybe. It was a pretty low-commitment job, and the hours worked well for us. He also got to work with friends, which was nice. The free lunches were a tasty perk, and we’re still enjoying our free ham. We served it for Thanksgiving dinner, and froze the leftovers. Every so often, I pull a bag of ham out of the freezer for sandwiches. Sure beats lunch meat. And I got several quarts of broth out of the ham bone. So, I’d say we got plenty in return for the hours that he put in.

If he decides to do it again, he’ll probably ask for a different job on the assembly line. Being a glazer is pretty hard on your hands and wrists, since you’re holding the torch for hours. It was even rough for the guy who glazes for them year-round. It’s definitely important to consider the wear and tear on your body when you’re choosing a job.

Sign up for my newsletter
FILED UNDER: Making Money