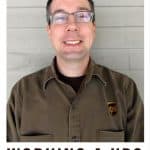 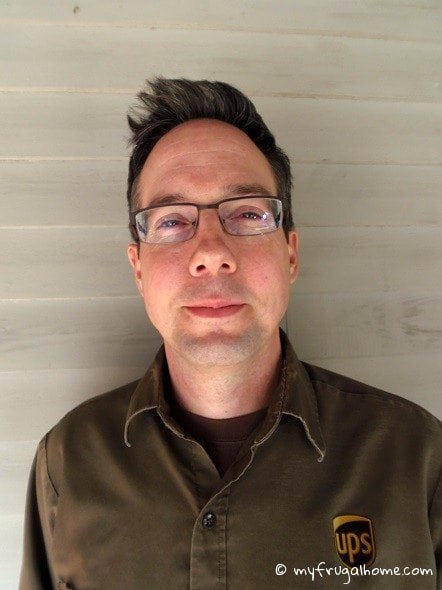 My husband just finished his seasonal gig as a UPS driver’s helper. Here’s how it went.

This holiday season my husband is working for UPS as a driver’s helper. His friend has been driving for them for 18 years, and my husband is helping him with deliveries.

He went to orientation last Wednesday, and he now has a week of deliveries under his belt. The pay isn’t great – $8.50 an hour, but he’s getting lots of exercise, and he’s enjoying spending time with his friend. When you live with three women (and five hens), I’m sure a little guy time is welcome.

He gets a call each morning telling him what time he needs to meet his friend. He might go in at 10 a.m. He might go in at noon. It just depends on how many packages they have to deliver. Most days they make about 200 stops, and they finish sometime between 5:30 and 7:30 p.m.

He logged 37 hours the first week, but that will probably go up as we get closer to Christmas.

It’ll be interesting to see how much money he makes doing this. I’ll post an update at the end of the season to let you know. But in the meantime, here a look at the best and worst part of the job so far.

My husband picked up his last paycheck Friday, so how much did he earn from this gig?

That was for 16 days of work, including the orientation day. So, it’s not a huge sum, but it is extra money in our budget. Based on everything we were told before he started, we were expecting him to get more hours and for the job to last longer than it did.

But honestly, we didn’t mind when it ended. We were ready to get back to our regular schedule by then.

When he finished his run on Christmas Eve, he was told they were done with driver’s helpers for the season. But he ended up getting a call the morning of December 30 expecting him to show up for work in 20 minutes. Apparently they had decided to continue using driver’s helpers through January 15. We were already busy with other things, so he turned down the extra hours.

And now the big question: Will we do this again next year?

Probably not. It was an interesting experience (certainly worth trying once), but the pay just wasn’t good enough for the extra chaos that it added to our already-busy schedule. He rarely got more than 20 minutes notice of when he needed to be to work, and he missed out on several of our family’s holiday traditions.

Have any questions about being a UPS driver’s helper? Just leave a comment, and I’ll do my best to answer them.

Sign up for my newsletter
FILED UNDER: Making Money